Absolutely thrilled to re-share my reviews for the revamped DI Avison Fluke novels – the covers are superb! I absolutely LOVE this series and whether Mr Craven is keen or not – I think he owes us fans at least a final Fluke blow-out novel. Who’s with me?!

A little about the books with their snazzy new covers before I share the original reviews from when the books were first  published – I’ve been a fan for some time!

Born in a Burial Gown 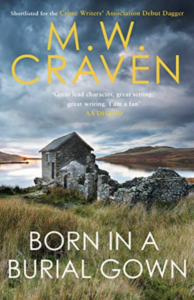 The first gritty thriller in the Avison Fluke series by M. W. Craven, the acclaimed author of The Puppet Show.

Detective Inspector Avison Fluke is a man on the edge. He has committed a crime to get back to work, concealed a debilitating illness and is about to be made homeless. Just as he thinks things can’t get any worse, the body of a young woman is found buried on a Cumbrian building site.

Shot once in the back of the head, it is a cold, calculated execution. When the post-mortem reveals she has gone to significant expense in disguising her appearance, Fluke knows this is no ordinary murder.

With the help of a psychotic ex-Para, a gangland leader and a woman more interested in maggots than people, Fluke must find out who she was and why she was murdered before he can even think about finding her killer… 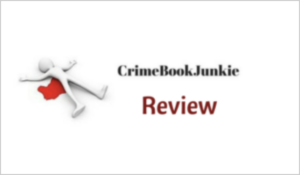 I first came across Mike Craven when I read his collection of short stories in “Assume Nothing, Believe Nobody, Challenge Everything”. That book was brilliant and I wondered if the author could deliver another cracking read. Well I am more than happy to say that he could and he did! ✨??✨

Born In A Burial Gown was extraordinary! The storyline itself was cleverly written and slowly uncovered. The subtle build up of suspense left me holding my breath as each chapter ended with a little more of the story revealed. The story hooks you from the start. You immediately start wondering what the crime is about as it is not delivered to you on a plate. I personally love the challenge of trying to figure out the case/mystery as I go along and I already had my “crime-solving” head on within the first few pages of this book. ?

We are introduced to Cumbria’s FMIT (Force Major Incident Team) with DI Avison Fluke as the lead. At times, Fluke reminds me a bit of Rebus — he does not tolerate fools and expects 100% from those he works with. You get a deeper insight into Fluke and his team in this story and I really enjoyed that. I began to visualise what each character looked liked and the quirks that make them who they are. ???

The descriptions of places, people and the crime(s) were well written. I particularly loved the description of Fluke’s home in this book…so much so that I want to live there myself!!  I also enjoyed learning the meaning of the title when it was revealed in the book.  I had heard it before but the significance it has for the story works perfectly and Mr Craven shares it at just the right time in the story.

If you are looking for a book that will keep you guessing right until the very end well this is the book for you! Highly recommended – I think it will be one that stays with me for some time. (It did!) Well done Mr Craven on such a mind-blowing read! 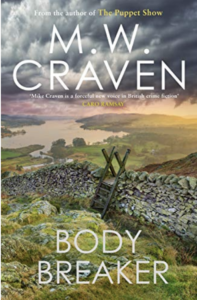 The second dark and twisted thriller in the Avison Fluke series by M. W. Craven, the acclaimed author of The Puppet Show.

Investigating how a severed hand ends up on the third green of a Cumbrian golf course is not how Detective Inspector Avison Fluke has planned to spend his Saturday. So when a secret protection unit from London swoops in quoting national security, he’s secretly pleased.

But trouble is never far away. A young woman arrives at his lakeside cabin with a cryptic message: a code known to only a handful of people and it forces Fluke back into the investigation he’s only just been barred from.

In a case that will change his life forever, Fluke immerses himself in a world of New Age travellers, corrupt cops and domestic extremists. Before long he’s alienated his entire team, has been arrested under the Terrorism Act – and has made a pact with the Devil himself. But a voice has called out to him from beyond the grave. And Fluke is only getting started…

I originally beta read this book back in January 2016 and thought the day would never arrive when I could shout out about it’s awesomeness! #DIAvisonFluke is back with a #BOOM!

Cumbria is where it is all happening with DI Fluke and the Force Major Incident Team (FMIT).  We are faced with the past, grief, revenge, life changing choices, and a search for the truth.

The prologue instantly grabs you as it is emotive and mysterious – and somewhat haunting, in my opinion.  Immediately I had questions that I hoped the rest of the pages would answer….and OMFG, I am not sure I was prepared for the onslaught of action that followed but I immediately knew I would LOVE this book… Starting off fast, the plot races and I was caught up in a journey that kept me guessing.  The author then lulls the reader into this false sense of security until #BOOM – the sh*t gets real peeps!!

I wish I could talk about #AllTheCharacters – but that would not leave much for the rest of you readers, so I will share my thoughts on those I love, or who made an impact on me.  First off there is DI Avison Fluke – I bloody love that name!  I was thrilled to see the author injected Fluke’s wickedly wonderful sense of humour throughout.  Fluke is a clever one and he doesn’t mince his words.  However, he was also very introspective in this story and I really liked that side of him.  Bridie, a hard-ass solicitor and Fluke’s girlfriend, brings out a side to Fluke that I am not even sure he knew existed!  #NoSpoilers though!

DS Towler is probably my favourite personality of the FMIT.  He is Fluke’s best friend from the old days, an ex para- loyal, strong and quick-witted.  The type of guy you want on your side. I actually picture an army tank when I see his name…don’t ask, I think he just comes across this way to me! ?? But boy, do they really set him up in this one…#PoorPoorTowler – I laughed….you’ll see why when you read the book!

Jinx, Twist and Vane are three more characters that had me questioning my reasoning all throughout.  Do I trust any of them.  Were they involved in Mark Bishop’s murder?  Free spirit’s …well, Vane….not so much ? but they all played a key part in moving the story forward and keeping me turning those pages.

I cannot leave out Nathanial Diamond – this guy made my skin crawl! Ruthless gang leader who “owed” Fluke – but can HE be trusted? He helps Fluke out but what price will Fluke have to pay?  Damn….I was on the edge of my seat! And finally, “The Choreographer” – well who the hell is this??  Totally intriguing and utterly compelling, wait until you come across this character.  There is one more character you may recognise, though they have had a sex change….LOVED IT!

So, #bookjunkies…do I recommend this read?  HELL YEAH I do!!  Talk about a kick-ass, mind-blowing, are-you-bleeping-serious ending!  Why, Mr Craven….WHY are you doing this to me?  You had better be a fast writer as you can’t keep us waiting another year for the next book! (Update… I am still bloody waiting!!)