Absolutely over-the-moon to re-post my review of Allan Watson’s HEART SWARM as part of the blog tour organised by the fabulous Sarah Hardy of #BookOnTheBrightsidePublicity. A little bit about Allan and this book before I share my review though… 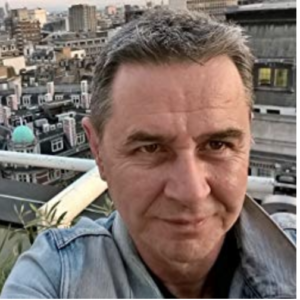 Allan Watson is a writer whose work leans towards the dark end of the fiction spectrum. He is the author of seven novels – Dreaming in the Snakepark, Carapace, The Garden of Remembrance, 1-2-3-4, Monochrome, Heart Swarm and Wasp Latitudes.
In between the books, Allan wrote extensively for BBC Radio Scotland, churning out hundreds of comedy sketches, in addition to being a regular contributor for the world famous ‘Herald Diary’.

He occasionally masquerades as a composer/musician, collaborating with crime writer Phil Rickman in a band called Lol Robinson with Hazey Jane II whose albums have sold on four different continents (Antarctica was a hard one to crack)

Allan lives and works in Glasgow, Scotland, but has never worn the kilt or eaten a deep fried Mars Bar. He also once spent three days as a stand-in guitarist for the Bay City Rollers, but he rarely talks much about that… 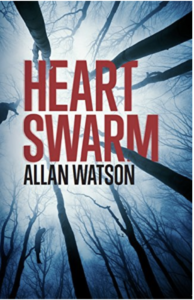 It feels like history is repeating itself when out-of-favour detective Will Harlan gets summoned to a crime scene in the village of Brackenbrae after a young girl is found hanging in the woods.

Five years ago Harlan headed up the investigation of an identical murder in the same woods; a mishandled investigation that effectively destroyed his credibility as a detective. The new case immediately takes a bizarre twist when the body is identified as the same girl found hanging in the woods five years ago.

The following day a local man commits suicide and the police find more dead girls hidden in his basement. The case seems open and closed.

Until the killing spree begins.

Harlan finds himself drawn into a dark world where murder is a form of self-expression and human life treated as one more commodity to be used and discarded.

Wow! This was some book!

Set in the fictional village of Brackenbrae, Scotland the reader is immersed in loss, mistakes, the past, regret, corruption, morals, control, power, abuse of the most heinous kind, the question of whether the ends justify the means and the search for truth and justice.

The opening chapter leaves your jaw on the floor as you are pulled into this intriguing, ominous and oh so gritty web of lies and mystery.  I liked the pace and narrative. So well written, I wasn’t sure if I was reading a recollection of true events or a tale of horrible happenings.  There is a really dark and atmospheric feel to this story and it is not for those who have weak stomachs.  Little is left to the imagination as the descriptions are so vivid – and haunting….the stuff of nightmares really.  I almost felt I should have had a strong shot of whiskey to calm my nerves. Yeah…it was brilliant!

“…dancing to a tune that only the dead can hear.”

I have to say, there were a lot of characters to keep track of in this story as the crime was HUGE and well, I won’t say anymore.  For me, this brought an authenticity to the story.  Everyone also soon became a suspect in my mind!  DI Will Harlan is definitely a character I would love to come across again.  He is the typical cliché detective with a drink problem….but not so much, if that makes sense! A case from the past comes back to haunt him and a pandoras box of hell is unleashed on the unsuspecting folk in Brackenbrae. I loved his sense of humour, which was injected throughout the story and lightened the theme slightly.  He was determined, stubborn and had to examine his choices as they were borderline questionable at times! I really liked this guy!

Cara was another fab character –  she had her own demons to deal with but she says it as she sees it; aggressive at times but it worked for her as she was also quite vulnerable. The aggression was often used as a defence mechanism. DCI Kelly was your typical arsehole. I loved the friction between him and Harlan. But he had little to no redeeming qualities in my eyes.  There are sooo many more characters I would love to talk about but I don’t want to spoil anything!

I can’t even delve into the dark-side/character(s) of this story as it would just spoil it for others.  I have to say, I am not sure I was completely satisfied with the outcome at the end of the novel, but as it keeps churning in my mind, it clearly has made an impact – so that can only be a good thing, right!?

Would I recommend this book? You bet your sweet arse I would! Such a twisted, iniquitous, devious story that had me turning the pages with bated breath! If you like to dabble on the darker side of crime fiction, this is definitely a novel that will pique your interest! I will certainly be keeping my eye out for Detective Will Harlan in the future!

Find out what everyone else thought by following the blog tour here: 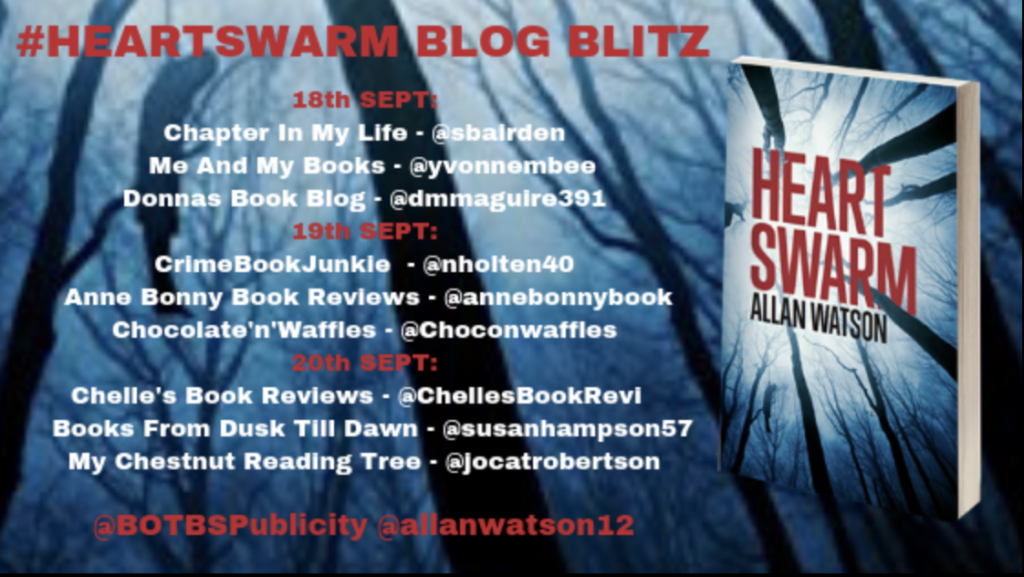