I’m THRILLED TO BITS to be taking part in Doug Johnstone’s Fault Lines blog tour today! Huge thanks to Anne Cater of #RandomThingsTours and Orenda for asking me and providing me with an ARC of this wee gem!  How about we find out a little more about the author and this book before I share my review! 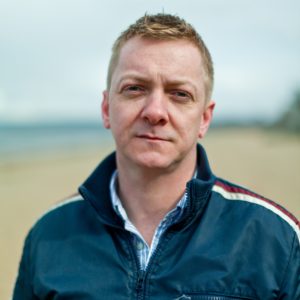 Doug Johnstone is a writer, musician and journalist based in Edinburgh. His seventh novel, The Jump, was published by Faber & Faber in August 2015. Gone Again (2013) was an Amazon bestseller and Hit & Run (2012) and was an Amazon #1 as well as being selected as a prestigious Fiction Uncovered winner. Smokeheads (2011) was nominated for the Crimefest Last Laugh Award. Before that Doug published two novels with Penguin, Tombstoning (2006) and The Ossians (2008). His work has received praise from the likes of Irvine Welsh, Ian Rankin, William McIlvanney, Megan Abbott and Christopher Brookmyre.

In September 2014 Doug took up the position of Royal Literary Fund Fellow at Queen Margaret University in Edinburgh. Doug was writer in residence at the University of Strathclyde 2010-2012 and before that worked as a lecturer in creative writing there. He’s had short stories appear in various publications and anthologies, and since 1999 he has worked as a freelance arts journalist, primarily covering music and literature. Doug is currently also working on a number of screenplays for film and television. He is also a mentor and manuscript assessor for The Literary Consultancy.

Doug is one of the co-founders of the Scotland Writers Football Club, for whom he also puts in a shift in midfield. He is also a singer, musician and songwriter in several bands, including Northern Alliance, who have released four albums to critical acclaim, as well as recording an album as a fictional band called The Ossians. Doug has also released two solo EPs, Keep it Afloat and I Did It Deliberately.

Doug has a degree in physics, a PhD in nuclear physics and a diploma in journalism, and worked for four years designing radars.

He grew up in Arbroath and lives in Portobello, Edinburgh with his wife and two children. 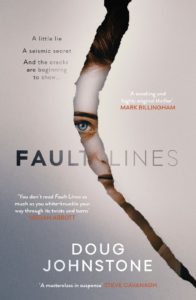 In a reimagined contemporary Edinburgh, where a tectonic fault has opened up to produce a new volcano in the Firth of Forth, and where tremors are an everyday occurrence, volcanologist Surtsey makes a shocking discovery.
On a clandestine trip to new volcanic island The Inch, to meet Tom, her lover and her boss, she finds his lifeless body, and makes the fatal decision to keep their affair, and her discovery, a secret. Desperate to know how he died, but also terrified she’ll be exposed, Surtsey’s life quickly spirals into a nightmare when someone makes contact – someone who claims to know what she’s done…

Holy hell or high water – I am determined to do this book justice with my review but I have to admit, I may well fall short! It was an EPIC read in my opinion and I was more than pleasantly surprised!

Set in Firth of Forth, Edinburgh – the reader is taken on a journey of sorts where jealousy, loss, grief, relationships, mistrust, manipulation and obsession hang over the story like a shrouded veil.

The opening of this novel had me intrigued as everything was neatly laid out for the reader to absorb…well, almost everything! The fantastic descriptions really set the scenes and had me right there in the moment! A cleverly woven plot had me wondering who and what to believe, and the characterisation made for relatable and believable characters throughout. The pace was perfect with a slow build up of tension and suspense, exactly where they should be. We see each of the important characters develop seamlessly throughout the story. Although I had figured out the “who”, I had no idea of the “why” and the sense of jeopardy that lead to the explosive finale was just…well…PERFECT!

Novels that bring characters alive will always be amongst my favourites and Mr Johnstone did just that! I could go through each character, but instead, I just want to mention Surtsey and leave the rest to you readers to discover, embrace and adore on your own.  I loved Surtsey, but suspect she may be a marmite character as she was someone who I never knew whether to trust. I found her confident yet vulnerable, courageous but with actions/decisions that were certainly questionable and rebellious but somewhat focussed as well. She was a bit all over the place but also quite grounded. Like I said, I simply adored her!

Would I recommend this book? Oh – you bet your sweet arse I would! Fault Lines is an original, emotive, exhilarating and absolutely tantalising read. I have a few of Doug Johnstone’s books on my TBR and although this was the first I have read, it most certainly will NOT be the last!

I urge you to treat yourself to something unique and engaging – grab your copy today! Catch up on the rest of the blog tour here: 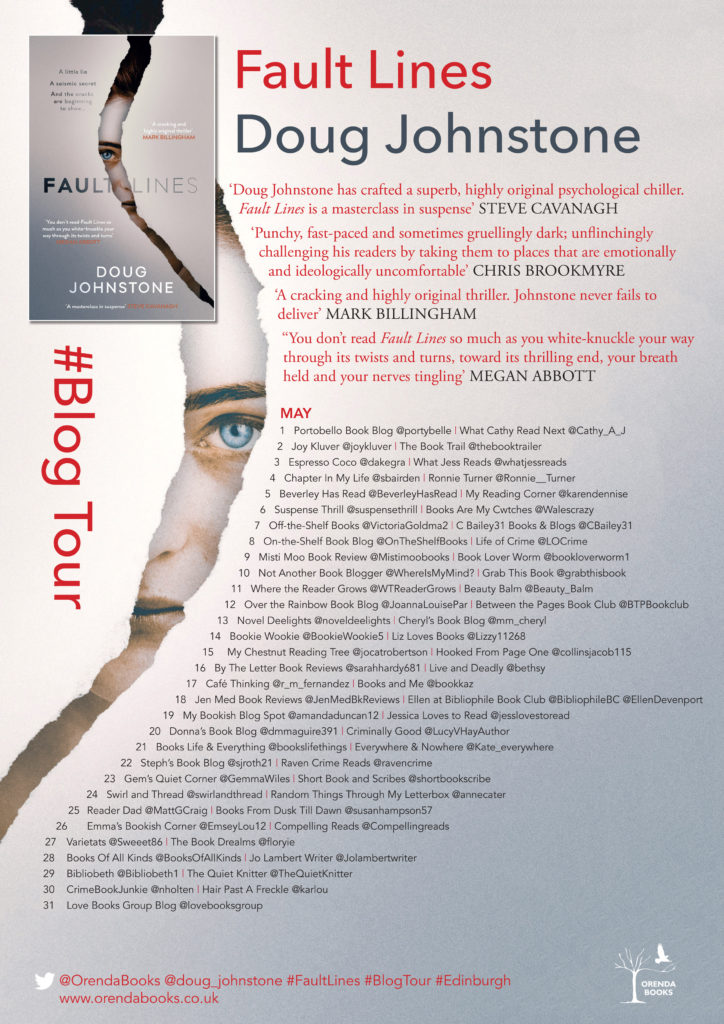