I know people will think I am biased, but I have to say Bookouture have been on ?FIRE ? this year with some cracking crime thrillers! To prove it, my guest reviewer Claire Knight is hosting Sarah Wrays Her Best Friend blog blitz today with a cracking review! First though, lets take care of the usual business…. 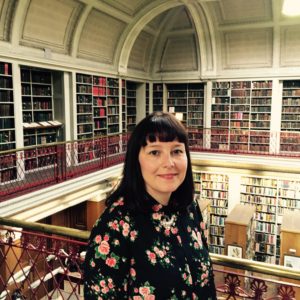 Sarah Wray is originally from Yorkshire but now lives in Newcastle-upon-Tyne where she works as a technology writer and editor. She won a Northern Writers’ Award (Arvon Award) in 2015 for an early version of her first novel. 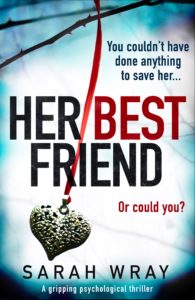 You couldn’t have done anything to save her.
Or could you?

Sylvie Armstrong has been running from her past for twenty years – until her mother’s death forces her to return to her home town, along with her newborn daughter.

Overwhelmed by grief in her childhood home, Sylvie tries to block out the memories that surround her – but then someone leaves a gift on her doorstep: a gold necklace with a heart-shaped locket.

This locket belonged to Sylvie’s best friend, Victoria Preston – and she was wearing it the night she died. Now it’s back in Sylvie’s life…and it soon becomes clear that somebody knows what really happened to Victoria.

Sylvie has to know the truth. But is she in terrible danger?

A gripping, page-turning psychological thriller with a final twist that will leave you open-mouthed. Fans of Sophie Hannah, The Girl on the Train and Gone Girl will be hooked.

Sylvie is dragged back to her childhood home after her estranged mother dies leaving her the family home. Little does Sylvie know that the murder of her best friend Victoria 10 years previous is subject to a documentary in the making. Old wounds are being reopened but will Victoria’s murder finally be solved?

The story packed with suspense jumps between the present day and 1995 when Victoria disappeared. The long chapters drip fed me tit bits of clues of what happened that fateful night right to the end that gave me goosebumps! It possibly didn’t help I was sat against a cold window in November but I think I’d have felt them snuggled up in my bed with the electric blanket on full!!

Despite this book being packed with tension, it’s a dark slow burner. Don’t expect to hit the ground running or to feel like you have been on a rollercoaster but I think that is the beauty of Sarah Wray’s writing. Both in this novel and her debut “Reported Missing” you are taken on a journey but you don’t have the map and the path isn’t lit. You don’t see what’s coming round that next dark corner.

Many thanks to Bookouture for my copy of Her Best Friend and for having me on the blog blitz. And big #lilpossum thank you to Noelle for letting me host the #Crimebookjunkie stop!

BOOM! ?? Thanks so much for your awesome review #lilpossum! If HER BEST FRIEND sounds exactly what you’ve been looking for #bookjunkies, click the link below or head on over to amazon and grab a copy now!