Thrilled to be taking part in Zoe Sharp’s Fox Hunter blog tour today! I didn’t think I would get a chance to read the book in time, so opted for a guest post…but guess what!? I raced through this fantastic read so have a review too! #BOOM! ?? My thanks to the author and the ever so awesome Ayo Onatade for asking me to take part and providing me with an ARC.  Sooooo…#LetsDoThis! 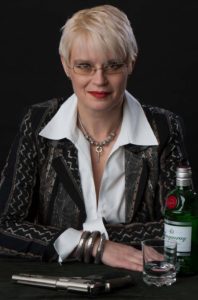 Zoë Sharp was born in Nottinghamshire and spent her formative years living aboard a catamaran on the northwest coast of England. She learned to stand up for herself at the age of seven, when she was transferred into a tiny village school from a private all-girls’ establishment. She’s pretty much been fighting her way through life ever since. Find out more at www.ZoeSharp.com 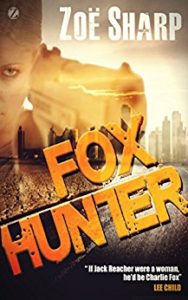 The dead man had not gone quietly … There was a time when I would have given everything I owned to be the one responsible for that.’

Charlie Fox will never forget the men who put a brutal end to her military career, but she vowed a long time ago she would not go looking for them.

Now she doesn’t have a choice.

Her boss and former lover, Sean Meyer, is missing in Iraq where one of those men was working as a private security contractor. When the man’s butchered body is discovered, Charlie fears that Sean may be pursuing a twisted vendetta on her behalf.

Sean’s partner in their exclusive New York close-protection agency needs this dealt with—fast and quiet—before everything they’ve worked for is in ruins. He sends Charlie to the Middle East with very specific instructions:

Find Sean Meyer and stop him. By whatever means necessary.

At one time Charlie thought she knew Sean better than she knew herself, but it seems he’s turned into a violent stranger. As the trail grows more bloody, Charlie realises that unless she can get to Sean first, the hunter may soon become the hunted.

Well holy sh*tballs! What a book!  Set in Iraq, the reader is faced with the past, revenge, shame, relationships, survival, trust and a search for the truth. Boom! Boom! BOOM!

There was a #killerhook right from the start that pulled me in to this fast-paced, action packed opening and from then on, my heart was racing as I turned each page! The narrative is tight, descriptions vivid and the action sequences had me feeling each blow by blow account! Wow! Wow! Wow!  This was my first experience of the Charlie Fox series, despite NUMEROUS recommendations from others…but I tell you what, I will definitely being going right back to the start to devour this series!

Character-wise, I totally immersed myself in those the reader was introduced to. So many great peeps to talk about, but as I don’t want to ruin anything, I will touch upon a few. Charlie Fox, for instance is just su-bloody-perb! She is not a lady to be messed with! Stubborn, determined and totally kickass….yeah, I may just want to be her when I grow up! And for some reason, I pictured the author – Zoe Sharp, in my mind everytime I read the name Charlie Fox! She has integrity, independence, courage, strength but I also get the feeling she is a little more vulnerable in this book than she may have been in others.

There were a few strong, female leads who really shone – alongside the main one of course! I loved Luisa Dawson, Madeleine and of course, Aubrey Hamilton – each were courageous, forthright, clever, cunning and pretty kickass in their speciality! Parker was a fab character too and one who I assume struggled with separating his personal and professional side internally! Sean Meyer was one I started out not liking very much, to him being redeemed slightly in my eyes and then…well…not sure how I felt about him by the end.  The baddies were superb…we were on a race to figure out which one was worse/responsible and I just LOVED how it all came together.

I really could rave about this book for ages! It was an intense, compelling and totally engrossing read. The twists and booms were exciting and nail-biting. The action sequences had me feeling each blow by blow account. It was just…well…bloody amazing!  This book could easily be read as a stand-alone but I suspect, like me, you will want to go back to the start and read this series from the very beginning!

I am thrilled now to have a post from Zoe Sharp where she delves a little deeper into who is Charlie Fox! Enjoy!

CHARLIE FOX—Zoë Sharp
CHARACTER ASSASSINATION—CHARLIE FOX
Zoë Sharp
One of the best reviews I ever had for a novel featuring my former Special Forces trainee turned bodyguard heroine, Charlie Fox, came from Paul Goat Allen in the Chicago Tribune. He described her as, “Ill-tempered, aggressive and borderline psychotic, Fox is also compassionate, introspective and highly principled: arguably one of the most enigmatic—and coolest—heroines in contemporary genre fiction.”

It’s very hard, sometimes, to get a good handle on your own creation, and always something of a surprise to note how others see her. After all, writing a first-person narrative means I get to look out at the world through Charlie’s eyes. And rarely are any of us cursed or blessed enought to see ourselves as others see us.

I knew from the start that I didn’t want to write a conventional character. She has always been an outsider to some degree—a social misfit. Not for lack of opportunites, for sure. She’s the daughter of wealthy, upper middle-class parents. Her mother is a mainstay of local charities, with a seat on the local bench as a Justice of the Peace. Her father is a well-respected consultant surgeon—at least at the start of the series.

But Charlie has always been a disappointment to them both. Not the son her father so badly wanted. Not the girlie-girl her mother longed for. Instead, she discovers an aptitude for combat and joins the military partly, I suspect, to rail against their expectations. Having failed so spectacularly to live up to their hopes, maybe she attempts instead to live down to their fears.

Things do not go well for her in the army. Not for lack of talent, but perhaps for calling too much attention to herself from the wrong kind of people. Betrayed, she finds herself back in civvy street, cast adrift from the life for which she thought she was so suited. She has a battered sense of self worth and a half-formed killer instinct, but no legitimate direction in which to use it.

That is where we join Charlie Fox at the start of the first book in the series. She’s scratching a living teaching self-defence classes and working at the local gym, all the while knowing there’s something else—something more—out there for her. She just doesn’t know what.

And it’s not until she’s forced to face her past, and come to the rescue of someone more vulnerable than she is, to take the brakes off the lethal capabilities she’s probably always had but never channelled, that Charlie starts to kick into a higher gear.

I didn’t want Charlie Fox to fall into female sleuth roles I’d read so often, of busybody, sidekick, or man-in-a-frock. Giving her a motorcycle as her primary means of transport was a considered decision rather than a macho gimmick. I know from my own biking experience that you have to approach life with a different attitude on two wheels. Constantly vigilant, aware of your own mortality, and slightly paranoid because sometimes it really does seem that every other road user is out to get you.

It was a perfect fit for her to move into the world of close protection. Finally, she could grow into her own skin. I made another conscious decision to allow the character to evolve from book to book, to learn from her experiences as much as she might be wounded by them. She’s always gone a long way to avoid physical violence, but if it’s inevitable, she doesn’t flinch from what has to be done.

Charlie’s still learning, still growing, and although she’s harboured a certain desire for revenge since before the start of the series, in the latest outing, FOX HUNTER, she realises she’s not above showing compassion to those who might very well least expect it from her.

From here on, she’ll face fresh challenges. Discovering how she copes with everything that comes her way is one of the things I enjoy most about writing her. One thing’s for certain though—she’ll always come out fighting.

Thanks so much for that awesome post, Zoe! I am now a fan of Charlie Fox and wished I hadn’t waited so long! Regardless, I have gone back and purchased the first few books in the series and cannot wait to get started! Fox Hunter is out now and you can grab a copy below. Make sure to follow the rest of the tour too! 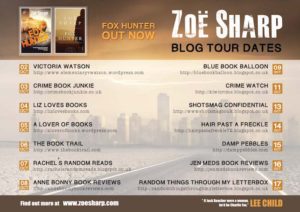