Today I have a #guestreview from Claire Knight for Alex Day’s The Missing Twin published August 18th 2017 by Killer Reads. Grab a cuppa and enjoy! 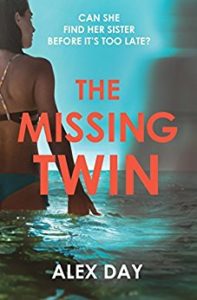 Can she find her sister before it’s too late?

A missing girl…a secret to be uncovered.

Edie and her identical twin Laura have always been best friends. So when Laura surprises Edie at the Mediterranean holiday resort where she’s working, Edie can’t wait for the partying to start! But then, Laura vanishes without a trace…

At the same time, in a country on the other side of the sea, Fatima and her twin daughters set out on a harrowing journey that only the strongest – and luckiest – survive.

Edie and Fatima’s lives are worlds apart, but now, their paths are set to collide, with devastating consequences. When Fatima hovers on the brink of survival, Edie must risk her own life to save her, and finally discover the truth about her missing sister.

The Missing Twin is a story of two women, Edie and Fatima. Each different to the other. Edie,a woman from Western Europe, working at a Mediterranean resort enjoying the sun sea and male attention. Fatima couldn’t be further from Edie, she’s a widow with twins on the refugee trail to a better life.

I loved the way the chapters alternated between these two women’s stories as Fatima continues her journey to Europe and Edie who is searching for her missing twin Laura after she arrives unannounced and vanishes after one night. My heart was tugged in so many ways as I read each story. I was heartbroken for Fatima, willing her and her children to make it to Europe. As Edie’s search continued, I became more and more worried for her state of mind, she became more erratic and I do like an unreliable narrator!

I really didn’t know where the story was going as it developed. The author kept me totally in the dark but the final third of the book ramped up the speed and gripped my full attention as the story climaxed.

Many thanks to Killer Reads and Netgalley for my copy of “The Missing Twin”.

Thanks for your awesome review, Claire!  Sounds intriguing! Grab a copy of The Missing Twin via the link below!