EEEEEEEEEEEK! Now this is something delicious to end your Thursday night with a smile on your face!!

NOIRELAND International Crime Festival is delighted to announce a sensational new addition to this year’s programme. The internationally celebrated Irish actor Aidan Gillen will be appearing in a special event on Saturday 28 October * entitled ‘Playing in the Dark: Aidan Gillen talks Crime with Brian McGilloway’.

Aidan Gillen will be discussing the influence of crime fiction on his life and career, from the books and television shows Gillen enjoyed growing up to the award winning roles he has become renowned for. 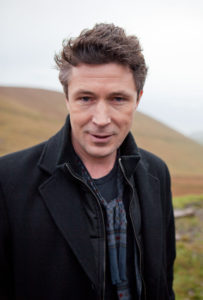 “Crime fiction has been a big part of my life for as long as I can remember. As a kid, I loved mystery novels and was addicted to American cop shows. As an actor, I’ve been fortunate to been involved in some fantastic crime dramas. I am delighted to be taking part in NOIRELAND International Crime Festival and spending time in Belfast again.”

Aidan Gillen has earned an international reputation as one of Ireland’s finest actors. Best known for playing manipulative and scheming characters (including Petyr Baelish in HBO’s Game of Thrones), his performances resonate with subtlety, intelligence and depth, and won him a host of acting awards. Gillen, who will be appearing in the new series of the BBC’s Peaky Blinders, has starred in some of the most iconic and influential crime dramas produced in recent years, including the multi-award winning The Wire and RTÉ’s Love/Hate.

Playing in the Dark: Aidan Gillen talks Crime with Brian McGilloway takes place at 19:30, Saturday 28 October * and is part of the NOIRELAND International Crime Festival in Belfast www.noireland.com