In case I haven’t made it blatantly obvious I’m a HUGE fan of Lynda La Plante and the DCI Jane Tennison series! I am thrilled to be taking part/kicking off the GOOD FRIDAY blog tour and have an awesome Q&A with the #QueenOfCrimeDrama herself! EEEEEEEEK!

And make sure you follow this awesome tour via @BonnierZaffre as there are some cracking bloggers involved! 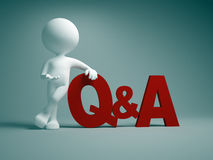 I am over the moon and thrilled to have THE Lynda La Plante on my blog today. Thank you so much for agreeing to take part! I am too excited to waffle on, instead let’s just get stuck right in! 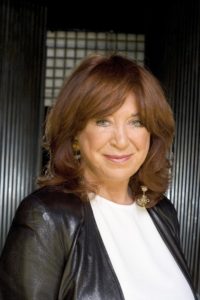 Although you certainly need no introduction, for those who may not be familiar with your writing, please tell us a bit about yourself and your background?
I suppose I am fortunate to have had a career as an actress before I became a novelist and screen writer. I was a student at RADA and then worked extensively in repertory theatre and also did a lot of TV work. Although I was always in employment, I felt that I was never going to make it my career. I began to write. And using all the experience I had as an actress, wrote the series WIDOWS. In actual fact I was writing a leading role for myself. It was not until I gained a commission and became very serious about the scripts and the authenticity of researching the characters, did I realise I had not created a role for myself! WIDOWS became an international success and I never acted again.

You are involved in a lot of charity work, can you tell us a bit about some of the charities you support and why you chose them?
I am proud to be an Ambassador for Variety the Children’s Charity and The Princes Trust, it is very rewarding to do whatever I can to help.

What do you like to do when you are not writing?
I enjoy walking in Richmond Park with my dog Max and relaxing with a good novel and a glass of wine. I am an avid reader of historical biographies and watching documentaries. I think I predominantly enjoy learning new facts, perhaps one day I will write a period drama.

What was one of the most surprising things you learned in creating Jane Tennison?
Writing Jane Tennison was a fascinating process as I researched her with a wonderful DCI and she became the basis of her character. I am often surprised when asked if I am like the character but the reality is, she is not Lynda and I could never have become such a brilliant detective.

Other than Jane Tennison perhaps, do you have a favourite character that you like to write about? If yes, which one and why?
I really enjoy all the characters I create, but I think my most favourite one is Freedom Stubbs from my first novel ‘The Legacy’

Looking back, if you could change anything about Jane Tennison what would it be and why?
I think I would have liked the character to become a high-ranking Commander, but the fourth television series onwards was written by other writers. Although they were very successful, I would not have wanted her to become an alcoholic. I have always felt that she had become such an iconic figure, it was very sad to see her sink into alcoholism.

Why crime? Are you interested in any other genres or have you written anything outside of crime fiction at any time?
I love to write crime and I have a very enjoyable and rewarding career. I hope that maybe one day I will be given the opportunity to write historical fiction.

Would you ever consider collaborating with another author? If yes, who? Why?
I would find it very difficult to collaborate as writing is quite a solitary endeavour and as I have never co-written anything, I don’t quite know how I would be able to balance out the process.

When choosing a book to read what draws you in?
I do read a lot of crime, partly because I have to be on top of the game. I enjoy Michael Connolly and yet I became addicted to reading Louise May Alcott’s novel The Inheritance that had remained unpublished until 1997. It was really fascinating and in many ways reminded me of the Brontes.

What books have most influenced your life?
As an actress I read all the great classics, and I still find returning to Shakespeare, Ibsen, Strindberg and Chekov constantly renews and influences my work.

What book are you reading right now?
I am reading for the second time The Glass Castle by Jeannette Walls.

Are there any new authors that have grabbed your interest?
Caz Frear’s Sweet Little Lies. Her ability to write tight, tense dialogue with a dark comedic slant is brilliant. I love to champion new writers and I read her book in one sitting.

What current projects are you working on?
I am currently working on the fourth Jane Tennison novel and will reveal the title on my website shortly. I am also researching the plot lines for four further novels, and at the same time writing a TV series for the US.

Is there anything you find particularly challenging in your writing?
Writing is always challenging, if a reader has already sussed out the plot in the first two chapters then the novel has failed. I am therefore very aware of the thriller element that keeps on making you turn the pages.

What question do you wish that someone would ask you about your books, but nobody has? ~ And then answer it!
I think you have been very successful in asking me questions that no one else has, but maybe one day someone will ask me how I do it! And my honest reply would be …I have no idea!

What criticisms have helped you as a writer?
Sometimes criticism comes from a disgruntled writer, and that can infuriate me, but I am not someone who says they never read bad reviews …and whether or not I have ever felt it was beneficial I doubt it …….

If you could describe yourself in three words, what would they be?
Dedicated, professional and fun

I know you will be attending Bloody Scotland this year, (and yay! I will be there) but will you be at any other festivals or book events where readers can connect with you?
I have numerous events and festivals this year as I thoroughly enjoy meeting my fans and readers so please say hello to me at Bloody Scotland. Always check my website and sign up for the newsletter to keep updated.

Are there any topics in your writing (in terms of crimes) that are just “no go“ areas?
I find child murder emotionally very difficult to write about, and I often feel that it is a cheap way to create a thriller. It carries too much pain and heartbreak. I have never met a single police officer who has investigated a child murder and been able to forget the trauma. It is a terrible crime that rips at your heart.

What is the worst crime you have ever had Jane Tennison investigate?
In my new novel GOOD FRIDAY Jane becomes embroiled in a hunt for an IRA bomber that has killed and maimed innocent people.

Thank you so much for taking part in this Q&A! I hope that I will get to meet you at one of the events/festivals you will be attending this year!

Good Friday by Lynda La Plante is out now, published by Bonnier Zaffre in hardback. RRP £18.99. 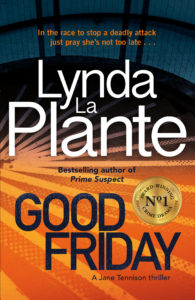 BEFORE PRIME SUSPECT THERE WAS TENNISON.

Every legend has a beginning . . .

During 1974 and 1975 the IRA subjected London to a terrifying bombing campaign. In one day alone, they planted seven bombs at locations across central London. Some were defused – some were not.

Jane Tennison is now a fully-fledged detective. On the way to court one morning, Jane passes through Covent Garden Underground station and is caught up in a bomb blast that leaves several people dead, and many horribly injured. Jane is a key witness, but is adamant that she can’t identify the bomber. When a photograph appears in the newspapers, showing Jane assisting the injured at the scene, it puts her and her family at risk from IRA retaliation.

‘Good Friday’ is the eagerly awaited date of the annual formal CID dinner, due to take place at St Ermin’s Hotel. Hundreds of detectives and their wives will be there. It’s the perfect target. As Jane arrives for the evening, she realises that she recognises the parking attendant as the bomber from Covent Garden. Can she convince her senior officers in time, or will another bomb destroy London’s entire detective force?