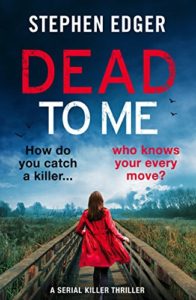 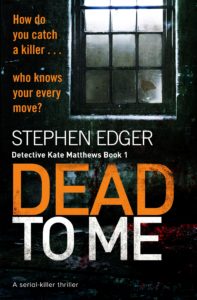 How do you catch a killer who knows your every move?

The woman lay flat on the table, her face to one side, her wrists bound with thick tape. Deep scratches marked the wood beneath her fingers, now resting cold and still…

When a woman’s body is found in an abandoned bar near the Southampton docks, Detective Kate Matthews is called in to lead the investigation. She must solve this case to prove she is coping with the death of a close colleague.

Kate knows a pile of ripped up newspaper cuttings discovered at the victim’s house must be a piece of the puzzle, but her team keep hitting dead-ends… Until she finds a disturbing clue that convinces her of three things: The murder is linked to the body of a man found hanging in a warehouse, she is on the hunt for a calculated serial killer, and the killer is watching her every move.

Kate realises there will be another victim soon, and that her own life is in grave danger, but no one else believes her theory. Can she find and stop the most twisted killer of her career, before another life is lost?

Well Oh-My-Giddy-Aunt!  For those of you who aren’t aware….I am a HUGE, a MEGA, a MAHOOSIVE fan of Stephen Edger’s books – in fact, I have a massive fictional crush on Mark Baines (series of the same name) and I often beg Mr Edger for more of these books. Needless to say, I was THRILLED when he signed with Bookouture for a new series: DI Kate Matthews and was hoping it had that same edgy, authentic feel as the rest of his books.  *High Five* Mr Edger – you delivered on that count!

Set in Southampton, the reader is taken on a journey of discovery, deceit, betrayal, fear, insecurities, regrets and the search for justice.

I loved the fast-paced plot, #killerhook and compelling narrative. I was really pulled into the pages of this story and read it virtually in one sitting!  What would YOU do to protect yourself/those you love?  What if you were a police officer?  Would you bend the rules? Go against protocol? You bet your sweet arse you would!!  That is exactly the choice Kate is faced with….

So on the topic of Kate…let’s talk characters!  DI Kate Matthews has a past…demons…but she is fiesty, reckless, insecure, clever – ok, she doesn’t always make the right decisions….but guess what?  Who does?  This is exactly what I find likeable about her.  If anyone reads a police procedural and thinks that in real life, coppers don’t bend the rules….well, I’d say you have never worked with the police before!  I have!!  Not saying all coppers bend rules…and I am not talking corrupt cops either…but it happens!  Love that sense of realism in this book.  I also warmed to Kate because she is insecure about her ability to be a good mother after suffering post natal depression. She beats herself up internally whilst trying to desperately show the emotions she feels outwardly – in an awkward way.  And that temper!!  Jaysus!  Forget the rule breaking- she needs a bit of anger management! ?

I like Laura as well.  A supportive colleague & friend, she acted as Kate’s conscience at times.  I did not like Patel at all.  Something about him really niggled and annoyed me.  A bit of a brown nose in my opinion and I found myself saying to my kindle: “Well if it bothers you so much, Patel – do something about it!” ?

Danny Fenton also intrigued me.  Bad boy but he had something about him.  Very confident, very assertive and despite the naughty side….I really liked him and wished there was just a bit more!

I thought I had nailed the killer – in fact, I was so sure that when I suddenly realised I got it wrong, I reread some parts again in shock!  Nicely played, Mr Edger!!!

Do I recommend this read?  Hell Yeah I do!  This is an exciting, new female-lead police procedural in the crime community and I, for one, am looking forward to Book 2 in the series.  Full of suspense, with a realism that surprised me – I am definitely putting this beauty in my #TopReadsOf2017!