I had the absolute honour / pleasure of being a Bloody Scotland reader once again this year and was thrilled to see Gordon Brown’s Darkest Thoughts as one of the 5 books selected for me to read.  Over the coming weeks, in the run up to Bloody Scotland on Sept 8th 2017, I will be doing a mini review of each of the books I read.  So let’s find out a bit about the author, the book & my thoughts: 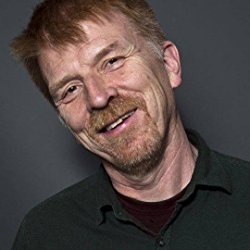 Gordon Brown lives in Scotland but splits his time between the UK, the U.S.A. and Spain. He’s married with two children. Gordon once quit his job in London to fly across the Atlantic to be with his future wife. He has also delivered pizzas in Toronto, sold non alcoholic beer in the Middle East, launched a creativity training business called Brain Juice and floated a high tech company on the London Stock Exchange.

He almost had a toy launched by a major toy company, has an MBA, loves music, is a DJ on local radio, compered the main stage at a two-day music festival and was once booed by 49,000 people while on the pitch at a major football Cup Final.
Gordon has been writing since his teens and has four books published – his latest, Darkest Thoughts, being the first in the Craig McIntyre series with book 2 out in September 2017 and book 3 in February 2018. 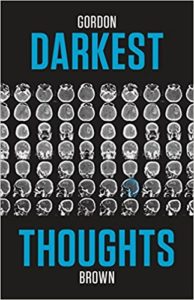 Craig McIntyre’s mere presence can turn people’s darkest thoughts into action.
On an Iraqi street, McIntyre finds himself at the center of an event that leaves several people dead. Ex-military, now a bodyguard, he has no idea how they died.
Others think he is responsible – the catalyst. They have no issue with that. Far from it. Indeed, they are intent on harnessing Craig’s dark talent for creating chaos – and will let no-one stand in their way.
Who are McIntyre’s pursuers? What do they see in him that he cannot see in himself? And what will happen to him if he is caught? Worse, what will happen to those closest to him if he escapes?
Darkest Thoughts is a fast-paced international thriller built on a stunning premise that builds to a dramatic climax.

Darkest Thoughts is Book 1 in the Craig Mcintyre series.  I have to admit, like the main character, I was a little overwhelmed at the start (in a good way) having no clue where the story was headed.

Craig McIntrye, ex-military- originally from LA,  finds himself in a situation that he just can’t explain. I loved how this character grew from the start of the book – he was likeable, vulnerable – and a little messed up to say the least.  Who needs weapons when you have Craig McIntyre around?  His mind may well be the most lethal weapon out there- a potential killing machine-  is he the perfect assassin?!

This was a fast-paced, edge of your seat read.  Action-packed, thrilling and kinda bloody cool – I have to admit, my curiosity is well and truly piqued and I look forward to what Mr Brown has up his sleeve for Book 2 in this series.

A great concept – unique and riveting, I definitely recommend this book to those who like twists, high octane thrills, mixing things up and suspending reality.

Grab a copy via the link below!