Woohoo!  Massive thanks to Sabah Khan of AVON for asking be to take part in Lisa Stone’s THE DARKNESS WITHIN blog tour today!  I am thrilled to share a bit about the  book and a chapter extract with you to really whet your appetite!  Grab a cuppa, sit back and enjoy! 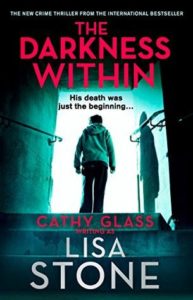 You know your son better than anyone. Don’t you?

When critically ill Jacob Wilson is given a life-saving heart transplant, his parents are relieved that their loving son has been saved.

However, before long, his family are forced to accept that something has changed in Jacob. Their once loving son is slowly being replaced by a violent man whose mood swings leave them terrified – but is it their fault?

Jacob’s girlfriend, Rosie, is convinced the man she loves is suffering from stress. But when his moods turn on her, she begins to doubt herself – and she can only hide the bruises for so long.

When a terrible crime is committed, Jacob’s family are forced to confront their darkest fears. Has the boy they raised become a monster? Or is someone else to blame?

This is a spellbinding crime novel with a dark heart from the worldwide bestseller Cathy Glass, writing as Lisa Stone.

Do you have that cuppa?  Here is a little extract that should grab your attention!

He always felt slightly uncomfortable, almost guilty, asking for help for his own, but he was sure the good Lord understood why it had become absolutely necessary. He wouldn’t have asked had it not been essential. Forgive me Lord for asking again but if it is your will . . . He struggled now; his prayer needed to be answered even if it wasn’t the Lord’s will. He was desperate and his wife was desperate too, and if he was honest they were both struggling with their faith, as they were being tested as never before. When life went well it was easy to have faith, he acknowledged, but when it went badly, really badly, and you stood to lose your only child, it was surely enough to shake the faith of even the most devout and ardent of believers?

‘Please don’t test me further in this way,’ he said as part of his prayers. ‘Anything but this. Not my son.’ As he spoke, the small inner voice of God reminded him that He had sacrificed His only son for the sake of humanity, which wasn’t what Andrew wanted to hear at all. He finished praying by thanking the Lord again and then asking that this day be the one.
Uncharacteristically, Mitsy began frantically scratching at the church door. Crossing himself, Andrew turned from the altar just as the door flew open and his wife Elizabeth ran in, without her coat and out of breath.

‘What is it?’ he asked, panic-stricken, and fearing the worst news possible.

‘They’ve found a donor!’ she cried. ‘It looks a good match. We have to leave now. Come on! I’ve left Jacob getting up. We’ll phone and cancel our appointments from the car. Be quick.’

Mitsy barked as though sharing this good news, and as Andrew hurried after his wife he thanked the good Lord for answering his prayers, and promised he’d never ask for anything for himself again.

Oooooooh!  Now that’s intriguing!  The Darkness Within is currently available so head over to amazon and grab a copy today!