Whoop! Whoop!  Thrilled to be hosting Tara Lyons’ DEADLY FRIENDSHIP blog tour today with my ‘lil star guest reviewer, Claire Knight! That’s right…it’s a double review, so make sure you check them both out! ? Thanks to Sarah Hardy and Bloodhound Books for an ARC. Right then, the formalities ~Let’s find out about the author and the latest in the DI Hamilton series! 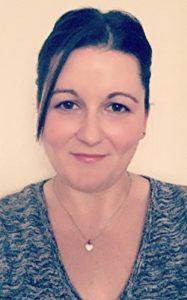 Tara is a crime/psychological thriller author from London, UK. Turning 30 in 2015 propelled her to fulfil her lifelong dream of becoming a writer. In the Shadows is Tara’s debut solo novel published in March 2016. She co-wrote The Caller and Web of Deceit: A DI Sally Parker novella with New York Times bestselling author, M.A Comley.

In August 2016 Tara signed a two-book contract with Bloodhound Books. The second book in the DI Hamilton series, No Safe Home, was published in January 2017.

When she’s not writing, Tara can be found at a local Wacky Warehouse stuck in the ball-pit with her young, energetic son.

Sign up to Tara’s monthly newsletter for exclusive news, previews and giveaways: http://eepurl.com/bN2KoH 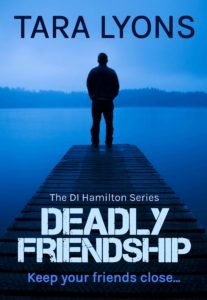 Who can you really trust?

Detective Inspector Denis Hamilton is dragged into a gruesome murder investigation, while on annual leave in Lake Windermere. A handwritten note, with a woman’s name, is found inside the corpse.

When a direct link to London is unidentified, Hamilton must race against the clock to make the connection before the body count rises.

Meanwhile, four friends with strained relationships, are reunited. What past event do they want to keep buried and is there something linking them to the murders?

Then, when a person from Hamilton’s past returns, he must ask himself: how well do we really know our friends?

London’s murder investigations team returns in this third novel from the bestselling author of In the Shadows and No Safe Home.

Does a policeman ever switch off and behave like a normal human being?? It would appear Denis Hamilton doesn’t even when he’s on holiday with his wife and mother in the Lakes. He just can’t help himself, getting involved in a murder case that’s well out of his stomping ground.

I do love Ms Lyons’ writing style. I find the stories totally capture me and I’m transported right into the thick of the action, interviewing suspects, walking crime scenes! I was totally addicted to Deadly Friendship, desperate to know what happened to Disappearing Donna and who was killing off the university friends one by one!

Despite this being the third in the Denis Hamilton series, you really don’t need to have read the previous novels – you can jump straight in and enjoy this one for what it is, a dark twisty turny crime thriller that’ll keep you guessing!

I loved the flash backs to the university days – yes I was the one who loved the cheesy nights at the local nightclubs. The student lifestyle was bang on in the reminiscing though I was not a fan of snakebite! I was more a cider girl back then!

I really did not see the ending coming – I was led right up the proverbial garden path with my suspect list!! A sign of an excellent crime novel!

Big thanks to Bloodhound Books for my copy of Deadly Friendship and to the amazing Sarah Hardy for asking me to take part in the tour. And big #busterbear thanks to Noelle for letting me join her on the #Crimebookjunkie stop of the Deadly Friendship blogtour.

Set in London, the reader comes face-to-face with betrayal, trust (or lack of), secrets, friendship, jealousy, loss, anger, revenge and the search for justice.

This book has a great prologue with that #killerhook right from the start and an awesome build up of suspense and anticipation that kept me wanting to turn those pages! The storyline was intriguing and kept me guessing – I found I was trying to put all the pieces of the puzzle together as each chapter was read.  What I liked a lot about this book was that it was told from two points of view: third person and occasionally the killer – a risky technique as if it is not done right, it can leave the story feeling very disjointed.  Fortunately, the author nailed it and really set the tone well!  It also had a #IKnowWhatYouDidLastSummer feel to it, without coming across as cheesy.  Loved that!

This part of the series was rich with characters, but not overloaded so the reader won’t get confused.  The main character, DI Denis Hamilton is married, but really seems to “like the ladies”- I mean he eyeballed all of them! Don’t get ne wrong, he loves his wife- but down boy! Did I miss something in book 2?! ? He has a great sense of humour, dedicated to his team/the job and determined to find the truth.  I felt I learned a lot more about him in this novel than the previous one I read. I love that!

Felcity- OMFG I really wanted to slap this girl as she just got on my nerves.  I get that she lost a friend and was scared, but she really annoyed me.  When a character gets under my skin and leaves an impression – whether it be a good or bad one- the author has done their job as far as I am concerned – well done, Tara!

I think one of my favourite characters, other than Rocky, in this book had to be DS Kerry Fraser.  New to the team, I immediately wondered What’s her story? DS Fraser was still trying to find where she fit in and wanting to prove herself.  A strong, confident but also vulnerable character I am really looking forward to learning more about her in future books.

I have to say, this book was the best in the series so far.  The author has really upped her game and her writing is going from strength to strength.  Would I recommend this book?  Well that would be an absolute Hell Yeah from me.  Although it is book 3 in a series, it can easily be read as a standalone.  So if you are looking for a police procedural packed with intense mystery and fantastic suspense – with a twist or two to keep you on your toes…then head over to amazon and grab a copy of Deadly Friendship!