Today I am thrilled to be joined on my blog by author of The Boneyard – Mark Sennen!  Thank you for popping over to my blog, Mark!

It is my stop on the blog tour today and I am LOVING the guest post as serial killers are a fascination of mine too!  I have quite a collection of books on serial killers and have been reading about them since the age of thirteen or so!  #NotAWeirdo – Working in the Criminal Justice Field for over 18 years, my interest is not one of admiration, but just a complete fascination on what makes these people tick.  Don’t think we will ever know – but I will keep reading about them!

I have The Boneyard on my TBR and really am looking forwarding to reading it.  So let’s find out a bit about this book …and the author, before we read his AWESOME and interesting post! 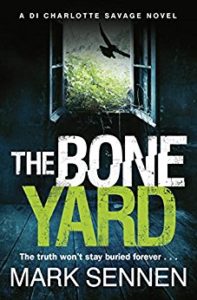 Malcolm Kendwick is charming, handsome – and a suspected serial killer.

When the partially clothed body of a woman is discovered on Dartmoor, all eyes are on one man.

There wasn’t enough evidence to convict Kendwick of his suspected crimes in America, but DI Charlotte Savage is determined to bring him to justice. She’s certain the woman’s murder, so soon after Kendwick’s return to Devon, is no coincidence. But Savage hadn’t anticipated one thing: Kendwick has a perfect alibi.

When more human remains are discovered at an isolated dumping ground, a full-scale murder investigation is launched. Savage realises it’s up to her to uncover the truth before the killer strikes again.

She knows Kendwick is hiding something.
Is there a limit to how far she’ll go to find out what? 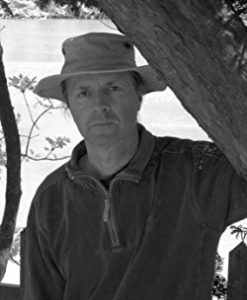 Mark Sennen was born in Surrey, but spent his formative years in rural Shropshire where he learnt to drive tractors and worm sheep. He has been a reluctant farmer, an average drummer, a failed Ph.D. student and a pretty good programmer. He lives, with his wife, two children and a rather large dog, beside a muddy creek in deepest South Devon where there hasn’t been a murder in years. He is the author of the DI Charlotte Savage series of thrillers: Touch, Bad Blood, Cut Dead, Tell Tale, Two Evils and The Boneyard.

My Serial Obsession with Serial Killers

Living out in the wilds of Devon, we don’t get many visitors. Certainly no casual callers. We (that’s myself, my wife and two daughters) live down a rough track and only the bravest dare risk damage to their vehicles to explore beyond where the lane narrows and the potholes deepen. Those that do arrive at the house are welcomed by our large Estrela mountain dog, Thunder. As his name suggests he is very loud and a little aggressive, although once he knows you, you’re more likely to be licked to death than bitten.

Once safely inside, visitors may well be offered tea and, as they sit in the living room and sip their brew, their gaze might alight on a bookshelf where, near the top, a large number of disturbing tomes are arranged. The titles range from Wicked Beyond Belief, to Angel of Darkness, through Bind, Torture, Kill, to Happy Like Murderers. But these are no works of fiction and there’s little literary merit to be found within the covers. You see, each is a detailed examination of killing and depravity. On spotting the books many a visitor has quickly downed their tea, made their apologies and left. Assuming I let them.

I jest. There aren’t any bodies in the vegetable patch (honestly). Still, the books are there on the shelf, an unhealthy number for any ‘normal’ person to possess. Of course, I can argue that initially one or two of the books were purchased for research purposes. However, it’s gone beyond that now. I don’t know if there is some version of Alcoholics Anonymous I can go to, but it’s needed: ‘My name is Mark Sennen and I’m obsessed by serial killers.’ There, I’ve said it and now I feel much better.

Let’s get one thing straight: my fascination with these deviants does in no way extend to admiration. These men (and yes, 99 per cent of the time it is a man) are to be despised, reviled and – depending on your view of crime and punishment – perhaps even terminated. In very few case is there ever a sense that there but for the grace of God go I. These killers made choices and have no excuses. Their crimes weren’t carried out in heat of the moment, nor did they murder for love or money. They weren’t mentally ill in the sense that they had no control over their actions (although quite clearly they are mentally ill). I guess that’s what piques my interest. They committed crimes so heinous that they lie beyond any understanding. We can only cling to the hope that serial killers are an aberration and that the fact they exist proves the normality of the rest of the human race.

One review of The Boneyard – the latest book in my DI Charlotte Savage series – said ‘Probably the darkest most twisted book I’ve read this year’ – a complement, sure, but I’d like to point out that none of the scenes would be out of place in a true crime account of serial killing. Fact is not only stranger than fiction, it is also more depraved. At the centre of the new book is the charming but deadly Malcolm Kendwick. My antagonist is an amalgam of several different real life characters, but readers who know their killers will certainly recognise traits from the man who is probably the most famous serial murderer in history: Ted Bundy. Bundy killed at least 30 women and girls in the 1970s – the actual number isn’t known and is possible much higher. Bundy’s defence lawyer, Polly Nelson, who ultimately failed to prevent his execution, said he was ‘the very definition of heartless evil.’ (yes, those are the words of his defence lawyer!)

The details of Bundy’s crimes make even the goriest novel seem like a children’s bedtime story. This isn’t the place to explore the actual murders, but if you want to read more then The Stranger Beside Me by veteran true crime author Ann Rule is fascinating, not least because by a quirk of fate Rule knew Bundy before he was ever a murder suspect. Bundy, like my antagonist, appeared to be charismatic rather than a loser. He wasn’t the archetype serial killer drooling at the mouth and hiding in the bushes. He had the potential to be successful and was politically active in the Republican Party (for the sake of balance, I should mention that John Wayne Gacy – AKA the Killer Clown – was active in the Democratic Party and he murdered over thirty boys and young men). Bundy was the type of guy any American mom would have been happy to see dating her daughter. He was good-looking and even attracted female groupies at his trial (although Ann Rule says ‘Ted was never as handsome, brilliant or charismatic as crime folklore said.’).

The obvious question is, how could a man so outwardly successful possess inner demons which could cause him to brutally murder dozens of women? We can’t know the answer, but a chilling quote from Bundy himself may bring some insight: ‘When you feel the last bit of breath leaving their body, you’re looking into their eyes. A person in that situation is God!’

Power, then, seems to be at the root of Bundy’s motivation. The power of holding somebody’s life in your hands. Few of us could understand how that could bring any kind of thrill, but how else to explain Bundy or a killer like Harold Shipman, the British doctor who killed over two hundred of his elderly patients? We can come up with all sorts of theories, but ultimately there’s no single answer and that’s what makes the serial killer at once both fascinating and frightening in real life and in fiction. In fiction we can hope for a resolution to the story – the detective catches or kills the murderer and we can close the book and sleep soundly. In real life though, the scary thought is that your next door neighbour might be a Fred West or a Dennis Nilsen or even a charmer like Ted Bundy. As they say on Crimewatch, don’t have nightmares.

Finally, what about my obsession? Well, I’m a crime author who just happens to have a shelf packed full of serial killer books and I plead not guilty to all charges (but see my note below the bibliography).

Wicked Beyond Belief: The Hunt for the Yorkshire Ripper by Michael Bilton.
Happy Like Murderers: The True Story of Fred and Rosemary West by Gordon Burn.
Angel of Darkness: The True Story of Randy Kraft and the Most Heinous Murder Spree of the Century by Dennis McDougal.
The Stranger Beside Me: The shocking Inside Story of Ted Bundy by Ann Rule.
Bind, Torture, Kill: The Inside Story of BTK, the Serial Killer Next Door by Roy Wenzl.

Author’s Note: Ted Bundy was executed on 24th January 1989. The 24th January also happens to be my birthday….

Eeeek!  Is it weird that I totally LOVED that post?!  Too bad if it is…it rocked!  Thanks again to Mark Sennon and I recommend you grab this book peeps as it sounds a cracking read…or you can just wait for my review, as I WILL be reading this book!