Thrilled to be taking part in N.M Brown’s The Girl On The Bus blog tour!  My thanks to Sarah Hardy, Bloodhound Books publicist for organising and including me!  Today I have a brilliant Author Guest Post on N.M. Brown’s typical day when writing!  As an aspiring author myself, I found this post particularly interesting and I hope you do too!

But first, the usual stuff: 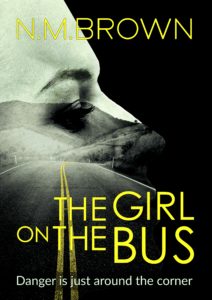 A retired detective and a young woman are about to face their worst fears.

Vicki Reiner is emotionally isolated and craves the fleeting happiness she experienced in the years prior to her college graduation. In an attempt to recapture this, she invites her former friend and room-mate, Laurie, for a break at her deserted beachside home. However, despite booking an online bus ticket, her friend never shows up and seems to have vanished.

Unable to accept the bizarre circumstances of the disappearance, Vicki approaches the police who dismiss her concerns before enlisting the reluctant help of Leighton Jones – a newly retired detective who is haunted by the death of his teenage daughter. Despite trying to remain detached from the case, Leighton is drawn to Vicki and her search for justice.

The unlikely pair face numerous obstacles but using a combination of methods he and Vicki track the killers who are working across the dusty freeways of North America.

Soon Vicki and Leighton find themselves nervously waiting at a remote bus stop expecting the arrival of the bus.

Will they ever discover what happened to Laurie?

And can they both escape with their lives? 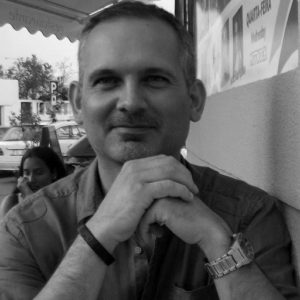 Norman M. Brown is an author living and working in Scotland. He attended secondary school in Stirling where he spent more time in the library or in the nearby park with a paperback, than he did in classes… Ironically, having graduated from Stirling University with a degree in English, he soon ended up back on the classroom again – where he has shared his love of fiction for two decades.

Having experimented with poetry, scripts and short stories over the years, he finally decided to write sit down and write the type of fiction he would like to read. The result was his crime thriller -The Girl on the Bus. As result, Norman was delighted to be signed to Bloodhound Books at the start of this year. The Girl in the Bus, is his first published novel. He is currently writing a second novel based on its protagonist – detective Leighton Jones.

As a part-time author, I still maintain my day job, which does involve teaching literature to hundreds of high school pupils every weekday. But I’m very fortunate, in that my work involves, discussing, analysing and creating texts. This does generally help my own writing- especially if I’m teaching Creative Writing techniques to S6 pupils. However, between classes, I also manage to make small notes on a sticky pad on my desk.

When I get home, I tend to wait until the kids are settled down for the night before I delve into the Californian sunshine of my imaginary world. On a usual week, this is usually two hours per night, but at busy times it can be squeezed to an hour.

For practicality, I divide my work into research followed by writing. For example at present, I’m working on the second Leighton Jones novel – based in and around Oceanside and an area called Black Mountain ranch. This means that each night, I start by looking over my California road map and combining this with Google street view to ensure that I clearly visualise what the setting should be at any given point. However, this approach also has the added benefit of helping with creativity too. Looking at a physical locations opens up all sorts of possibilities for the story too.

For example, in my current work in progress, I initially wanted a character to vanish from outside a harbour restaurant in Oceanside. I had a vague notion of the type of place it needed to be, so I googled the various places and eventually settled on the Beach Break Café. I looked at the various images and maps of the location and discovered that the car park was at the rear of café and therefore fairly secluded. This actually created a more convincing location from which the character might be abducted. I was also able to see the nearby gas stations and a motel, which gave the detective specific people he might want to speak to.

When I’m really in the productive zone, I might tap out up to 3000 words per evening, but generally it’s around 1000. And often this will simply be conversations and general narrative. Therefore, I often need to go back and revise and enrich the detail.

Leighton Jones is a character I enjoy spending time with. He is a morally good man, with enough flaws to ensure that he remains three dimensional. In The Girl on the Bus, we see him at the end of a police career, which cost him his marriage. This was compounded by the tragic death of his only daughter. He is therefore holding on just to leave the station for the final time with his head held high. Unfortunately, the new chief views him as a liability and just wants rid of him, and when Vicki Reiner approached him to help her locate her missing friend, Leighton he puts himself in the firing line.

Like most writers, I’m never fully satisfied that a story is ever finished. I think it’s sometimes helpful to aim to have the central concerns or conflicts resolved in your final chapters, but to still leave some aspects unresolved. This seems to reflect real life and give the readers some elements to think about even after they have finished the novel.

Thank you N.M Brown for stopping by my blog today!  Best of luck with your book which can be purchased HERE