Totally excited to be a part of Lucy Cameron‘s debut novel Night Is Watching blog tour!!  Massive thanks to Darren Laws at Caffeine Nights Publishing for an ARC of this book!  So no dilly dally today – let’s just get stuck in! 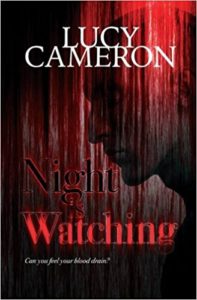 Can You Feel Your Blood Drain…
Couples are being slaughtered in their homes; women drained of blood, men violently beaten. There are no clues to track the killer, no explanation as to why an increasing amount of blood is being removed from the crime scenes.

Detective Sergeant Rhys Morgan is seconded to the ‘Couples Killer’ investigation. Tormented by vivid nightmares, he hasn’t slept soundly for weeks becoming convinced a creature from these nightmares poses a threat to him and his family. His behaviour becomes increasingly erratic causing his bosses to wonder if he’s the right man for the job.

As clues to the killer’s identity are uncovered, the line between what is real and what cannot be starts to blur and Rhys discovers the answer to catching the killer and exorcizing his own demons, may be as irrational as he fears.

Well jeepers-friggin-creepers!  This was NOT what I was expecting at all!  Paranoia, fear, revenge, a haunting balance between the known and unknown – all can be found within the pages of this book!  The underlying theme being the soul-stirring question of whether or not what you know to be true is true after all.  Those around you questioning your beliefs – making you question them yourself!  Gave me bloody goosebumps! I have to say, I was undecided on my rating at first as there was just so much going on and I had in my head that this was a crime thriller – but the more I thought about it, the more I realised that as a crime thriller this would be a 3.5 but as a horror book….definitely a 4!

The plot is fast-paced and I did race through the pages as I just needed to know WTF was happening!! What I loved about this book was the cross- genre aspect.  It was horror mixed with crime thriller and a dabble in the supernatural!  All cleverly wrapped up so I was biting my nails, whilst playing detective and it actually got me thinking about what I would do in a similar situation – probably wet myself if I am honest!  Bejaysus, it was eery, creepy yet totally mesmerising.  You have to suspend your beliefs to read this book as it is not your average police procedural, that is for sure!

Good chracterisation really brought the story to life. There were a lot of characters, and I did initially struggle to keep up, but once I did- the story really flowed.   I will, as always, focus on those characters that had more of an impact, in my opinion.  Rhys Morgan (the main character) is a family man but the current case he is working on and his own unsolved family tragedy years before, causes him to neglect those around him.  He is tormented, determined but also  very likeable – it took a while, but he grew on me and I found myself willing him to achive his end goal(s).  He has two kids and his wife Anna.  I have to be honest, she annoyed me.  I don’t know why, I just did not take to her at all, but I love Rhys’ son, Harry.  He seemed to be the only one who understood his father.

“Vile Boy”- Well OMFG! The whole storyline surrounding this character was hard on the heart, that’s for sure! I didn’t know whether to feel sorry for him or run as fast as I can.  Some might find his story a wee bit tough to bear, but then – if you are not afraid of challenging stories that make you feel a bit uncomfortable (like me) – you will see it for what it is and absorb the emotions as part of the plot.

Kier Finnegan- he is a bit of a mystery and for some reason, Prince Lestat from the Anne Rice novels would not leave my head! Who is this guy?  What does he know? Really thought this character was fantastic!

Do I recommend this book?  As a debut novel, this certainly left me with a desire to read more from this author so HELL YEAH, I do!  If sinister, dark, disturbing and chilling reads are what you are after, head over to amazon by clicking the book below and grab yourself a copy now!

One Reply to “Night Is Watching *Blog Tour Review*”