Eeeeek!  For all you booklovers out there, I have some exciting news……

Girl on The Train author Launches new Book in Harrogate 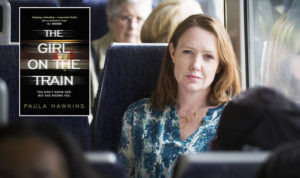 Paula Hawkins, author of one of the biggest debuts in crime fiction, The Girl On The Train, launches her follow-up Into The Water, exclusively in Harrogate on May 4.

Girl on the Train was the psychological thriller debut that nobody escaped. It debuted at No. 1 on the New York Times Bestseller list, was a USA Today Book of the Year and a major motion picture starring Emily Blunt. It occupied the number one spot of the UK hardback chart for 20 weeks, the longest any book has ever held the top spot, selling a staggering 15 million copies worldwide in the first year of its release.

Now, Paula Hawkins will launch her next novel – one of the most anticipated releases of 2017 – Into the Water, at an exclusive one-off evening with Harrogate International Festivals at Harrogate’s Crown Hotel, in partnership with WHSmith and Psychologies magazine.

The author of one of the most successful psychological debuts in publishing history will be interviewed on stage by the editor of Psychologies magazine, Suzy Greaves.

Paula Hawkins said: “For me there is something irresistible about the stories we tell ourselves, the way voices and truths can be hidden consciously or unconsciously, Into the Water is a book of many mysteries. It is about searching for answers, for meaning. I’m looking forward to talking about it in May.”

Into The Water is an addictive novel of psychological suspense about the slipperiness of the truth, and a family drowning in secrets. With the same propulsion that captivated millions of readers worldwide in her debut, Paula unfurls a gripping, twisting, layered story set in a small riverside town.

Gemma Rowland, Operations Manager at Harrogate International Festivals, said: “Audiences will have their chance to be the first to get hold of a copy of Into The Water, and Paula will be signing copies on the night. We’ve built a reputation for hosting one-off special book launches for the biggest names in the genre, from Jo Nesbo to JK Rowling, writing as Robert Galbraith. An Evening with Paula Hawkins promises to be one of the hottest tickets in town.”

Audiences will be able to redeem the £10 ticket against a copy of Into the Water at the on-site bookshop provided by WHSmith at the Crown Hotel on the night. Ticket bookers also receive a free copy of Tess Gerritsen’s Die Again to collect at the event.

Gemma added: “We’re also delighted to announce there’ll be 150 goody bag to collect on the night, with a free copy of Psychologies magazine and an Advanced Reading Copy of Transworld’s lead debut thriller for summer – Fierce Kingdom by Gin Phillips, which is tipped as a truly special book that promises to leave readers breathless.”

Alison Barrow, Director of Media Relations at Transworld, said: “Harrogate Festival has become a really effective early platform for publishers to offer goodie bags featuring Advanced Reader Copies of books. It has been the perfect launch spot for many of Transworld’s debut thrillers, including The Girl on the Train. There’s nowhere better to unleash a debut for those readers looking for the next big thing.”

Tickets £10 redeemable against the price of Into The Water. Includes a free copy of Tess Gerritsen’s Die Again with the first 150 bookers receiving a complimentary goody bag to collect on the night.