I am absolutely thrilled to have Denzil Meyrick on my blog today with a brilliant guest post talking about one of my favourite characters DCI Jim Daley and the background of the latest novel  If you have not read this series, you don’t know what you have been missing!  But rather than me waffle on, here is a little about the latest book in the series:  Well of The Winds and the author himself! PS: I LOVE the cover of this book! #JustSaying 😉 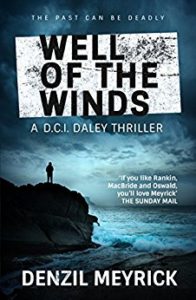 As the Second World nears its end, a man is stabbed to death on the shoreline of Kinloch, in the shadow of the great warships in the harbour. Many years later, the postman on the Isle of Gairsay, a tiny island off the coast of Kintyre, discovers that the Bremner family have vanished from their farm. There’s a pot on the stove and food on the table, but of the Bremners there is no sign.

When DCI Daley comes into possession of a journal written by his wartime predecessor in Kinloch, Inspector William Urquhart, he soon realises Gairsay has many secrets. Assisted by his indomitable deputy, DS Brian Scott, and new boss, Chief Superintendent Carrie Symington, Daley must solve a wartime murder to reveal not only the shocking events of the past, but new horrors of the present. 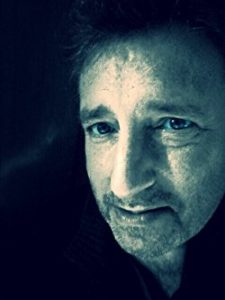 Denzil Meyrick was born in Glasgow and brought up in Campbeltown. After studying politics, he pursued a varied career including time spent as a police officer, freelance journalist, and director of several companies.
Beginning with Whisky from Small Glasses, then The Last Witness, Dark Suits and Sad Songs and The Rat Stone Serenade, the DCI Daley series have all become Scottish Crime bestsellers. Whisky from Small Glasses reached #2 in the UK Kindle store in 2016.
Most recent short story, Single End, was published in November 2016, and itself became a Kindle bestseller.
The much anticipated fifth Daley novel, Well of the Winds, will be published in April 2017 by Polygon. https://www.facebook.com/DenzilMeyrickAuthor/

When I first thought of writing a book, it was historical fiction that occupied my thoughts. Then, I reasoned, to do justice to such a work, a huge amount of research would have to be done in order to ensure that the resulting novel was as accurate, convincing and representative of the chosen period as possible.
​Resulting novel?
​Like many who embark upon writing a book, in those days I was rather unsure as to whether I had the staying power – that self-imposed discipline required – in order to see such a project through. As it turned out, I decided against history and deployed that old legend, write what you know.
​DCI Jim Daley was born; the rest – ironically – is history.
​Still though, I yearned to have a go at an historical work. However, such is the pressure of producing a Daley novel and novella every year, I wasn’t sure just when I would get the opportunity to realise this ambition.
​But, then something sprung out at me. I read a book by St Andrews University professor Gavin Bowd, entitled Fascist Scotland (Birlinn 2013). This fine piece of research detailed how a small, but significant number of people from right across society on the West Coast of Scotland were less than keen on seeing off Hitler, doing their best to thwart the war effort.
​In short, it was a gift for a writer of fiction – but how to fit it events during World War II into the contemporary Daley novels?
​Thankfully, regaled by stories of Campbeltown – the real-life inspiration for Daley’s Kinloch – during the war by my mother and grandmother, I already had the basis of what I wanted to achieve. Here was a very different place; the loch crammed with warships of all shapes and size; the population of the town almost trebled by the presence of military personnel.
​Well of the Winds, the fifth DCI Daley novel, moves between the present and the Second World War. When a family disappear without trace from a small island just off the coast of Daley’s Kintyre, the big detective soon discovers that they leave behind incredible hidden secrets. When he comes into possession of a journal written by his wartime predecessor, Inspector William Urquhart, he realises that to solve a mystery of the present, he must first solve a murder from the past.
​And there is something else!
​During my research for the book, I came across one of these peculiarities the past often throws up: something in plain view, but to all intents and purposes, unknown. Certainly, I cannot take the credit for its discovery – more appropriately its uncovering. Many of you will be intrigued, and at the end of the novel, I detail where and when this story within a story comes from.
​This little nugget from the real world, I weave into the story of Well of the Winds.
​Even now, it still has the power to shock. It shocked me!
​

Thank you so much, Denzil!  Awesome post, awesome series and most awesome author!  I highly recommend the DCI Daley series and if you want to give them a go, the latest can be purchased via the book below!