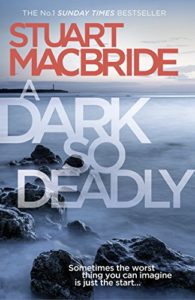 Gripping standalone thriller from the Sunday Times No. 1 bestselling author of the Logan McRae series.

Welcome to the Misfit Mob…

It’s where Police Scotland dumps the officers it can’t get rid of, but wants to: the outcasts, the troublemakers, the compromised. Officers like DC Callum MacGregor, lumbered with all the boring go-nowhere cases. So when an ancient mummy turns up at the Oldcastle tip, it’s his job to find out which museum it’s been stolen from.

But then Callum uncovers links between his ancient corpse and three missing young men, and life starts to get a lot more interesting. O Division’s Major Investigation Teams already have more cases than they can cope with, so, against everyone’s better judgement, the Misfit Mob are just going to have to manage this one on their own.

No one expects them to succeed, but right now they’re the only thing standing between the killer’s victims and a slow, lingering death. The question is, can they prove everyone wrong before he strikes again?

I am going to start with a massive gulp of air as I try and make sure I get in as much as possible about this book – I also need to say a big *Thank you* to Jaime Frost and HarperCollinsUK for an ARC of this utterly brilliant book!  It was a #BookBeast at just over 600 pages and although I needed wrist supports afterwards – OMFG it was SO worth it!

Set in Oldcastle, Scotland the reader is faced with regret, loss, abandonment, betrayal, corruption, murder, secrets and the neverending search for the truth and justice.  There is just so much in this book, I want to shout how absolutely bloody amazing it is from the rooftops!  Books excite me….this one put me in overdrive!

The plot was fast-paced and utterly compelling!  With a #Killerhook and a storyline that had me reeling, I raced through this beast in a matter of days – yes, it was #UnPutDownable! I absolutely adored the humour, banter and poking fun at crime fiction/crime writers littered throughout the pages – I was reminded of the TV series A Touch of Cloth – this was so subtle and cleverly imposed, that at times I had to wonder was I reading a book within a book? And the OMFG moments caught me off guard – LOVE when that happens – I was shrieking peeps…shrieking with the reveals!  I sooooo want to swear now….in a good way….because Jaysus….this book ROCKED!

The characters and narrative were another fusion of pure perfection in my opinion – I mean, the Misfit Mob is the absolutely ideal way to describe this bunch of unruly, unmotivated but completing fascinating group of individuals.  I really, really, really want to tell you about each and every one of them – their quirks, personality and hilarious existence mixed with vulnerbilities, sadness and sheer “are you for real!?” experiences made me wonder whether I should hug this bunch or kick them into shape.  One thing they were though is clever, and secretly determined to lose the misfit label by showing that they were good coppers! DC Callum MacGregor was a newbie to the Misfit Mob and if it wasn’t for bad luck, poor Callum would have no luck at all! Tragedy struck him in childhood and this thread reared it’s ugly head throughout this story.  But his past was not the only thing that affected him, his present wasn’t looking too good either! No spoilers though!  For me, Callum grew as a character as the story unfolded and his determination, courage, integrity and loyalty both helped and hindered him on his journey.  Loved him! Watt and Dorothy – all I am going to say about these two is I wanted to slap them silly! Despite this, I also really liked them – crazy!!  Adored “Mother”- hard-nosed and focussed but with sarcasm oozing from her pores, she really was sassy while being protective.  Her team may have been Class A “rejects” as DC Franklin referred to them as …but they were HER team and she was determined to look out for them! *High Five* for “Mother”! The final character I am going to mention is McAdams. I friggin’ LOVED his humour! Another dry, sarcastic, grumpy sod of a copper but his heart appeared to be in the right place initially.  I absolutely wish I could go on, but I have babbled enough, so will just URGE you to read this book to find out more about this wonderful group of characters!

The clincher for me though were the WTAF moments – that’s right! Not just an OMFG moment…nope….I had no clue at the twist(s) before they were revealed and let me tell you, Stuart MacBride did NOT disappoint me!  Writing this review, I am still shaking my head in disbelief!  Well played, Mr MacBride – a stunning read!

I am not even going to say Do I recommend this book? because if you haven’t realised it’s a You Bet Your Sweet Arse Hell Yeah I Do by now….well, I have failed to convince you of my absolutely delirious passion for this FANTASTIC work of crime fiction!  Have I used enough adjectives?  Have I convinced you?  Buy the book, #bookjunkies!!!! A most definite #TopRead2017 – it is one book you will want…no NEED on your TBR!  Click the book below for a quick trip to amazon ….you know you want to! ? …..and breathe……