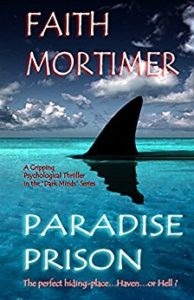 During a huge row, Gillian stands up to her abusive boyfriend. The consequences are horrendous and far-reaching.
Terrified, she flees her home, seeking anonymity abroad while coming to terms with the outcome of her actions.
In Portugal, Gillian meets Harry, a yachtsman, needing crew for his Atlantic Ocean-crossing. She applies for the job. Half-way into the journey, after confessing to her crime, Harry offers her refuge on an uninhabited island in the Caribbean which he says he owns.
Confused and depressed, Gillian imagines this is the answer to her problems. She needs time to lie low and consider her options; confront the authorities or live in obscurity? Harry is offering the perfect hiding place…or is he?
When things start going horribly wrong, she asks herself if she is alone on the island. But maybe the biggest question of all is why she gets the gut feeling Harry wants to keep her there at all costs?
What happens when she says … no?

I’ve never read any of Faith Mortimer’s books despite having at least three sat patiently on my kindle. I’d heard good things about the author’s novels from readers with similar tastes to mine so when offered a copy of her latest novel Paradise Prison, I said yes!

The start of the book was quite shocking with the accumulation of a number of years of psychological and physical abuse from her husband Lawrence, Gill finally snaps with rather drastic consequences. Her reaction is to run and she disappears to Europe and then to the high seas with captain Harry. Harry offers her time to sort herself out on his deserted Caribbean island. Sounds bliss doesn’t it? Sun, sea and solitude, no hassles or worries, just time to think. But is Harry all that he seems?

I really felt for Gill, she’s been through the mill with her abusive husband and all she wants is time to clear her head but she’s gone from one problem to another and this time it might not be so easy to escape!

Paradise Prison is a good read with plenty of atmosphere, intrigue and shocks as Gill and Harry’s story progresses across the Atlantic. I found it very readable and well written. I felt I was there on the boat and the Caribbean island with Gill. The only thing for me was it was a little predictable in places; for me a psychological thriller needs to mess with my head and I don’t know what’s going to happen next. Unfortunately Paradise Prison fell short of doing that for me but then again I have read some dark psychological thrillers over the years.

This hasn’t put me off reading any more of Ms Mortimer’s books as like I said, I’ve heard good things about her writing. I will be unearthing and reading those books buried on my rather overloaded kindle at some point.

Many thanks to Faith Mortimer for giving me a copy of Paradise Prison.

Thanks for your fab review, Claire!  If Paradise Prison sounds like your kind of read, click the link below!