I am over the moon to have the awesome Marnie Riches on my blog today with an equally awesome and interesting post about Women In Crime. My review for her latest publication, Born Bad, can be found HERE and is well worth a read! But first, let’s find out a little about the author! 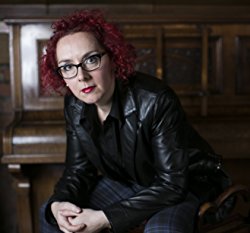 Marnie Riches grew up on a rough estate in Manchester. She learned her way out of the ghetto, all the way to Cambridge University, where she gained a Masters degree in German & Dutch. She has been a punk, a trainee rock star, a pretend artist and professional fundraiser. Previously a children’s author, now, she writes crime and contemporary women’s fiction.

Marnie Riches is the author of the best-selling, award-winning George McKenzie crime-thriller series, published by Maze and Avon at Harper Collins. The Girl Who Wouldn’t Die – the first outing for crime fiction’s mouthy, kickass criminologist – won the Patricia Highsmith Award for Most Exotic Location at the Dead Good Reader Awards 2015, whilst the series was shortlisted for the Tess Gerritsen Award for Best Series in the Dead Good Reader Awards 2016. With the latest installment being “The Girl Who Had No Fear”, the books have garnered both a loyal readership and critical acclaim.

Her brand new Manchester series – a must-read for fans of Martina Cole & Kimberley Chambers – is coming in paperback as well as digital format. Born Bad was released 9th March 2017 and will be available in all good bookshops.

Women in crime by Marnie Riches

People who have read my George McKenzie series will know that I’m rather fond of writing strong female characters. George herself is as kickass a heroine as you’re ever likely to meet, but she takes on her enemies with a believable fallibility. She gets injured. She gets cornered. She gets into very hot water. It’s always her terrible temper and love for others that put her in danger’s path. Similarly, her Aunty Sharon, Letitia and Van den Bergen’s IT expert, Marie are all heroines in their own way but struggle with their own demons, be it poverty, ill-health or crippling, enduring grief.

So, what about Born Bad? Well, when I was creating a new cast of characters to inhabit Manchester’s criminal underworld, I knew the people in charge would be, in all likelihood, men. That’s how the testosterone, violent world of crime works, isn’t it? That’s how life works! But I didn’t want to write a book only about men, and after all, most men in power have quietly strong women enabling them. Women have always been great enablers for their men and their children. It’s why men own 99% of the world’s wealth, and there are more male bosses called John in charge of FTSE companies than any women at all. Even though women are starting to grow in wealth, with some investing in stock portfolios (with Square shares and others being added to their spread), this is still something to note. Gender inequality – even in a country where equality of opportunity between the sexes is enshrined in law – is stark. But I wanted brilliant female characters. Who should I therefore create to give the feminine touch to this male-dominated landscape?

Paddy O’Brien is the bullish, bullying king of south Manchester. It made sense to me that his wife, Sheila, would be an archetypal ageing dolly-bird who spends much of her day on grooming herself to within an inch of her life. After all, I see this in real life around me on a daily basis, as I live in the cash-strapped, arse-end of an area similar to the fictitious Bramshott. Alpha males like Paddy almost always go for the trophy wives and girlfriends. They look good on the arm. They look decorative in bed. They’re easily placated by clothes, cars and gifts, and even if couples have very little in common, the men know they can get their fill of banter from their male friends and the women always have the gym and other women to fall back on. It’s not a life I lead, but this exchange of money for looks has gone on for millennia. But hang on! I’m the writer here. I didn’t want to create a two dimensional Barbie and actually, many of the “dolly-birds” in real life turn out to be astute business women who grow their own boutique companies – starting as a hobby but becoming real money-spinners. So, Sheila O’Brien had to be a woman whose still waters ran deep. I made her savvy, ambitious and the co-owner of her own illegal enterprise – a cleaning company staffed by trafficked workers. Sheila’s under the cosh in her relationship, but she dreams of more…

Her business partner is another tough cookie – Gloria Bell. Gloria is Sheila’s ex-cleaner but is now an entrepreneur in her own right. She’s a single woman and though she has been a terrible mother to her son, Leviticus in his teen years, she had brought the boy up on her own, scrubbing other people’s toilets to make ends meet. I wanted to introduce a religious woman who held a position of influence in her own tight-knit church-going community, so I made Gloria an elder of her local church. Given she’s a hypocrite of the highest order – and who doesn’t know the odd religious fanatic who harbours ill-will towards those who don’t fit with their world-view? – in Gloria, we have a character who succeeds on her own terms, albeit at the expense of others. For all she wears prissy silk dresses and spouts bible quotes at anyone who’ll listen, Gloria is a deeply troubled ball-breaker whom I’ve adored writing scenes for.
I didn’t just want Born Bad to be about a gangster’s world of wheeling and dealing, however. I knew that white collar criminals rely on professionals to launder their money. So, I created a character called Maureen Kaplan, who is the No.1 accountant to Manchester’s bad boys. She holds all of their dirty secrets in a safe house, far away from her shining, respectable Spinningfields offices. She’s the matriarch of an entire dynasty of Kaplans – sons and son-in-laws – who work for her and cook the books for the baddies. Inspired by the character, Proposition Joe who organised parlays between rival gangs in the long-running, seminal HBO series, The Wire, I decided that, given Maureen has enough dirt to bring every player in Manchester down, she would make an excellent Proposition Joe, facilitating talks between the O’Brien clan and the north-side’s Boddlington gang. There’s a wonderful rivalry between her and Sheila, with Paddy at its centre. I think readers will like Maureen – or at least, love to hate her.

When writing Born Bad, however, I knew I needed at least one female character who was good, through and through. Anjum Khan was born. She is the wife of north-side Boddlington boss, Tariq Khan and has absolutely no idea what her husband does for a living, since he is so careful to maintain a respectable front. Not only is Anjum a PhD, but she also runs the fictitious Asylum-Seeker and Refugee Advocacy Service in Cheetham Hill, ironically helping some of the very women that have fallen foul of the O’Briens’ and Boddlingtons’ trafficking activities. Anjum is truly a pillar of her community, and Tariq had better watch out! Because if she cottons onto his nefarious dealings, hell really does hath no fury like an intelligent, highly-moral woman scorned!

Just as readers have warmed to George McKenzie, her Aunt and her wayward mother, I hope they will grow to love Sheila, Gloria, Maureen and Anjum. In a man’s world, it pays to have some tough, savvy women on your side!

Oh I couldn’t agree more, Marnie! Born Bad is rich with characters and the females definitely do stand out! Thank you so much for this post and #bookjunkies…..BUY THIS BOOK – it is brilliant and will surprise you no end! 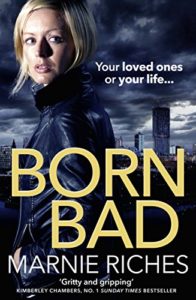