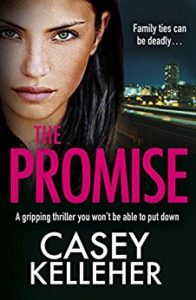 Two sisters. One murder. And an unbreakable bond.

Growing up in squalor with their drug-addicted prostitute mother, sisters Georgie and Marnie Parker have had to endure the very darkest side of life.

When their mother is sentenced for brutally murdering a client, Georgie and Marnie’s already precarious lives are blown apart and they now share a terrible secret. Sent to a children’s home, the sisters hope this might finally be their safe haven after years of neglect. But they soon discover they’re in real danger.

Desperate to find a place of safety, Georgie and Marnie run for their lives, but end up in the hands of Delray Anderton. A violent London gangster and notorious pimp, Delray has big plans for beautiful teenager Georgie, seeing her as a chance to make some serious money.

Fiercely protective of each other, Georgie and Marnie must escape the clutches of a man who will do anything to keep the sisters for himself. And, they must keep the promise they made to each other – no one can ever know the truth.

My thanks to Netgalley and Bookouture for an ARC of this book.

Eeeeeek!  I have been a massive fan of Casey Kelleher from the very start and have read each of her books with eager anticipation as I knew they would deliver.  The Promise, for me, has to be the best book by far!  Although Casey is unique in her own style of writing, the influence of such great authors as Martina Cole, Mandasue Heller, Kimberley Chambers and Mel Sherratt is evident in the gritty, gangland feel that oozes from the pages!

Set in Brixton, the reader is immersed in violence, control, greed, exploitation, fear, loss and doing whatever is necessary for survival.  The main theme tying everything together is the making of promises – some for the greater good, some that bring harm and some that are made with the best intentions but are never going to be kept.

OMFG this book was awesome!  With a fast-paced plot that pulls the reader in from the get go, I really struggled to put this book down once I started!  I just found myself holding my breath as I turned each page to find out what the hell would be happening next!  The storyline was fantastic and quite emotive at times.  The characters took over and made the story raw, gritty, and left my heart racing. Superb, Mrs! Absolutely superb!

Characters are my favourite aspect of any story – I need to feel some connection with them or I will struggle to enjoy a story – no fear with this book – Casey Kelleher really shines in this area and had a brilliant array of diverse characters that held my interest from the first page to the last. I won’t go through each and every one of them, but there are a few that are definitely worth a mention!

Josie and her two daughters, Georgie and Marnie were cleverly written as I think I went through every emotion under the sun with this family.   Josie has some serious flaws and demons to battle: drug & alcohol abuse, prostitution, and quite selfish.  However, she really does love her kids and believes – whether rightly or wrongly- that she is doing what is best for them.  Unfortunately, her choices often cause more harm than good and she ends up …well, I won’t say as I don’t want to spoil anything – but I started out really disliking her to only end up liking her by the end!  And her girls are just amazing!  The author has made these innocent, young girls develop into amazing, strong characters who will do whatever is necessary to protect each other! I almost felt maternal towards them….almost….and that is some feat!

I also adored Javine Turner.  What a character.  Another I disliked immensely – a gold-digger, out for herself but damaged due to her own upbringing.  You understood why she was the way she was, but her personality did not win any sympathy ….at first.  Wow!  What she endures and survives and comes out fighting against was simply amazing! I was cheering for her by the end!

Lenny Oldham and Delray Anderton — Holy sh*tballs, these guys were just the nastiest, vilest scumbags walking!  Evil personfied, they made my skin crawl.  They elicited fear, disgust, anger and distrust from me as a reader – I felt like jumping in the pages at times and doing some damage!  That is how much I despised these guys!  As a reader, I wanted to see someone bring these guys down and stomp all over their faces…whoa!  I need to calm down!  But it is exactly how they made me feel.  Torture would be too good for them!

Do I recommend this book?  OMFG, that is a massive Hell Yeah from me!  The characters are Rotten To The Core and Heartless but you watch them Rise and Fall and even though there is Bad Blood you almost become part of The Taken as you are drawn into The Promise! See what I did there! ? Seriously real, believeable and full of twists, this is definitely a book you will want to read!

Pre Order available via the links below and out February 17th!