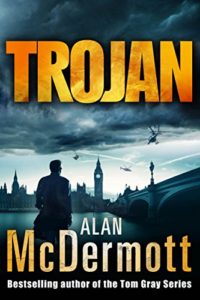 When MI5 learns that a horrifying new weapon is in enemy hands, agent Andrew Harvey is called in to track it down before it reaches British soil.

But then a woman is found murdered by the roadside and it soon becomes clear that London is in the crosshairs. The clock is ticking. Andrew and his girlfriend, Sarah, also a secret service operative, have only one lead: a beautiful refugee, desperate not to lose her son. But is she desperate enough to betray everything she believes in? And will she do it in time to help them prevent a terrifying attack?

As Andrew and Sarah race to unravel a convoluted web of subterfuge and exploitation, they discover there is more at stake than even they knew. And somewhere, at the heart of it, lurks a faceless enemy, who is prepared to use everything—and everyone—at his disposal.

I was lucky enough to be one of the first people to read this book many months ago!  My thanks to the author for an ARC.

Set in London, although other locations are highlighted, this book focuses on terrorism and exploitation in such a way that you are almost tempted to check the news!

I have to be honest and say that initially I found the pace a little slow – the backstory was being laid out and there were a lot of characters to take in..but then….OMFG – BOOM! The pace quickened and I found myself racing through the pages! I also have to say, it took me awhile to work out the significance of the title- I can be a little slow at the best of times, but when the pieces fell into place….well, hats off to the author…cleverly done!

What I like about this book is that it is quite evident that the author did his research.  The realism of this story is one such that you would really question whether or not this is something that actually happened!  It was quite eery! However, you are not bombarded with technical terms or too many storylines that you soon get lost – as I have come across this in other action-thrillers which focus too much on this aspect.

Characters are central to this story, and with so many,  I cannot mention them all, but I did adore Sarah and Andrew – both their professional relationship as well as the one outside of their work with MI5.  Sarah has a social conscience whereas Andrew will do whatever is necessary – it made me question how this relationship will develop in future books – but for now…everything just worked! The couple bounced off each other and the whole team just worked!

I also enjoyed how Tom Gray is introduced through Smart & Baines (ex soldiers) and I have the whole set of this series to now catch up on!  Don’t worry though, you do not need to have read any of the Gray series as the author gives you enough to link both together.

I thought this was a fast-paced, action thriller to start with but then Alan McDermott kicked it up to full throttle and left me gasping for air! I seriously could not put this book down and now find myself, true crimebookjunkie-style, gagging for my next fix! It is certainly one I recommend without hesitation!  Click the link below to grab a copy!