Woohoo!  I am a HUGE fan of Ian Rankin and the Rebus series….here I was stalking Val McDermid and Ian Rankin at Bloody Scotland! #CrimeAuthorsAreMyRockStars #TooNervousToApproach #FanGirl 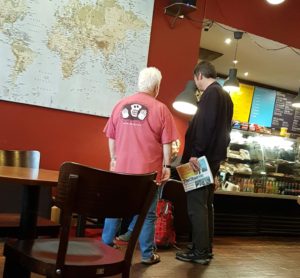 Thrilled that my awesome guest reviewer, Claire Knight, has read her FIRST Rebus novel and I hope that she adds more to her TBR!  Rebus reminds me a lot of another of my favourite fictional detectives….#DIHarryEvans created by Graham Smith!  Or maybe it is Harry Evans that reminds me of Rebus!  Either way, I love them both!  But I digress!  Here is Claire’s review of Knots and Crosses….enjoy! 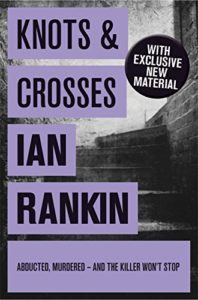 The very first Rebus novel from the No.1 bestselling author.

‘And in Edinburgh of all places. I mean, you never think of that sort of thing happening in Edinburgh, do you…?’

‘That sort of thing’ is the brutal abduction and murder of two young girls. And now a third is missing, presumably gone to the same sad end. Detective Sergeant John Rebus, smoking and drinking too much, his own young daughter spirited away south by his disenchanted wife, is one of many policemen hunting the killer.

And then the messages begin to arrive: knotted string and matchstick crosses – taunting Rebus with pieces of a puzzle only he can solve.

“There are clues everywhere, for those who read between the times.”

I bought Knots and Crosses for one reason, my dad. He’s read the Rebus books for a while now and I’ve bought him a few over the years. Then it dawned on me that Ian Rankin is one of the biggest names in UK crime fiction and I’ve never ever read a book…and I call myself a crime fiction fan!

John Rebus is a tortured soul, why? Only time will tell but his marriage failed and he fell out of love with the army. And now he’s got to find a killer who is abducting and killing young girls.

I felt the story was a bit slow in the first 10% but as I’m coming to Rebus late, I know this is going to be an ultra marathon, not a sprint. I’ve got 20 books to play catch up on!!

Saying that, the writing is excellent, I was right there in Edinburgh. The story is very character driven, I felt I got to know Rebus to an extent but I think there is more layers to be discovered as I read my way through the series.

Parts of the backdrop have dated – smoking in the office or even just indoors, the lack of mobile phones and the Internet. I’m looking forward to seeing Rebus and the team being brought into the 21st century as the books go along, using the current day gadgets etc that we take for granted and practices that are the norm now!

I’m definitely disappointed in myself for not reading anything from Mr Rankin before but I’m glad I’ve started on my Rebus journey. This girl will continuing to follow the investigations in and around Edinburgh!

Thanks, Claire!  Trust me – you will LOVE this series!  Fancy hopping on the #Rebus bandwagon?  Click the link below!