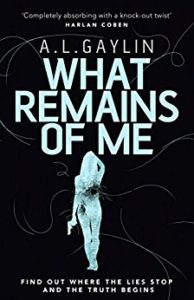 People don’t need to know you’re a murderer.
They just have to think you could be…

Thirty years later, Kelly is a free woman. Yet speculation still swirls over what really happened that night.

And when her father-in law, and close friend of McFadden is found dead – shot through the head at point-blank range – there can only be one suspect.

But this time Kelly has some high-profile friends who believe she’s innocent of both crimes.

I received a copy of this book via Netgalley / Cornerstone Digital .

OMFG #bookjunkies!  I cannot even begin to describe how bloody awesome this book is!  I devoured…DE-VOU-RED this book in a matter of hours!

Based on the synopsis, I think it is obvious that this book is set in California.  What is NOT so obvious is the sheer thrills this spine-tingling crime thriller brings to the table!  The reader is confronted with loss; a desire to fit in; secrets; betrayal; friendships; loyalty and some seriously messed up relationships!  SERIOUSLY MESSED UP! ?

Although I was hooked from the start, I did find the beginning a little confusing to follow as it moved from past to present time….but jaysus….once I got my reading rhythm going….well there was no stopping me!  Told from the third person POV, the book continues in this style of mixing the past & the present and for me, it really added to the story.  The pace immediately picks up after the #killerhook is revealed and I just could not put this book down!

There is quite a complex and diverse cast of characters in this book.  Way too many to go into specific details about, but of course, I will mention a few!  Kelly Marshall (Lund) is a fascinating character!  A tragedy in her teenage years leaves her feeling like a lost soul.  She is drawn to the “in” crowd of Hollywood’s rich & famous and this is where her life unravels.  What I love about her is the fact that I never knew exactly how to feel about her.  One minute I admired her strength, the next I was furious at her aloofness.  I think it was all the emotions she evoked in me, that drew me to her in the end.  Fab-u-lous!!

Bellamy Marshall – spoilt, Hollywood brat.  I never knew what was going to happen next with this character…but OMG…she has some secrets that will blow the reader away.  Maybe not as many as Kelly though…?? #JustSaying!

Shane Marshall – such a dark horse!  Bellamy’s annoying, little brother…who ends up with Kelly whilst she is serving her prison sentence! And the parents of these three are seriously messed up!  Don’t even get me started on them!!!

I also thought that Sebastian Todd (a journalist)  and Vee were great characters.  They were well written and although their parts were minor-  in the OVERALL scheme of things – they each had a huge impact on the story itself for different reasons – if that makes any sense!

Now I always have to have a go at solving the crime(s) in the books I read..so yeah…I was pretty sure I had cracked this one well before the book ended.  But then a spanner was thrown in that blew my theory right out of the water ..and I thought…ok…#MyBad …but I was back on track and had a eureka moment.  The hell I was…A.L. Gaylin had me reeeeeeeeling with more than one #WTAF moment before the book ended!  It rocked!!

So if you want a book full of suspense, twists that will have your jaw on the floor, and a storyline that will keep you guessing then I highly recommend you click the link below and grab yourself a copy of this book!! Definitely added to my #TopReads of 2016!