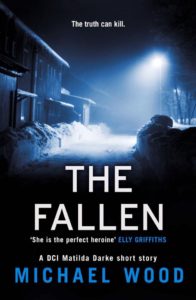 It’s Christmas in Sheffield. But not everyone is enjoying the festive season…

A man has been found brutally murdered in his own home. The victim is Iain Kilbride, a once-famous TV star who has faded into obscurity. All signs point to a break-in, but why has nothing been taken?

For DCI Matilda Darke, this is the perfect chance to prove her newly formed Murder Investigation Team are up to the task. Matilda suspects the clue to finding the killer lies in Iain’s past, but she’s about to discover how dark that past really is…

Eeeek!  When I heard that Michael Wood was writing a DCI Matilda Darke short story I squealed….yes squealed…with excitement!  I adore this character and I love short stories, so this was music to my ears! And that cover! Wow!  Dark, eery, mysterious – really draws you to the book!

Set in Sheffield, we are taken back to 2010 when Matilda has just been promoted from DI to DCI.  The reader is faced with jealousy, the past, loss/grief, sadness and some uncomfortable topics which the author handles brilliantly!

What I love about Michael Wood is his ability to bring his characters alive with a distictive voice and unique characterisation.  For a short story, you really feel as if you have read a full novel – the plot is enthralling –  fast paced, concise and a riveting read that has you hooked from the get go.

What I also loved about this novella is all the foreshadowing that was going on! It is rightly labelled a prequel and if read before any of the other books, you would not understand what I mean by foreshadowing.  But as I have read the other books, I was like a giddy, little girl every time another significant ‘event’ from Book 1 & 2 was revealed! So clever, Mr Wood…so very clever!

We finally get to meet James Darke! And it all becomes clear why in the later books, Matilda is so affected – she loves this guy…deep, unconditional, true love.  It is wonderful to see the relationship from the start.  Matilda has just made DCI in this novella and so she is still adjusting to her new role. Her sense of humour, determined nature and dedication to her work and home life shines through.  She still has some confidence issues but they are not as pronounced in this story as they are in both the novels.

Ooooh, Ben Hale…DI with a massive jealousy streak and a clear dislike of women succeeding in what he sees as clearly a mans role.  This quote, to me, perfectly describes Ben Hale’s viewpoint: “I’m the carcass, and you’re the vulture” – he says this to Matilda after overhearing a conversation that has his blood boiling- what an arse!  Unlikeable from the start, he really does ooze nastiness.

Adele Kean is also another fave of mine.  I love her character and her support and friendship is evident from the get go.  Although she never has a major part (as such) to play, her impact on the reader is immense.

And Eeeeek! We get to meet Jonathan in his pre-book 1 role!  The minute his name was mentioned I tensed.  That is how significant his character is.  But I won’t say anymore as …well…I can’t!

The twists in this book were once again phenomenal, I am still gobsmacked by the fact that this author had only released his DEBUT novel around this time last year!  Michael Wood is talented, clever and a master at delivering a story that sticks with you!

It should come as NO surprise that I highly recommend this short story and all of Michael Wood’s books to date!  Simply superb!  I am keeping my fingers crossed that Killer Reads will see what a gem of a short story teller Mr Woods truly is!  More, please!!  (But more novels of course, too! ?) This is definitely a must read, #bookjunkies, so to save you time…I have posted the link below!  ?