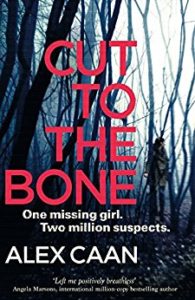 Ruby is a vlogger, a rising star of YouTube and a heroine to millions of teenage girls.
And she’s missing . . .
But she’s an adult – nothing to worry about, surely?

Ruby, in the dirt, pleading for her life.

Enter Detective Inspector Kate Riley; the Met’s rising star and the head of a new team of investigators with the best resources money can buy. Among them, Detective Sergeant Zain Harris, the poster boy for multiracial policing. But can Kate wholly trust him – and more importantly, can she trust herself around him?

As hysteria builds amongst the press and Ruby’s millions of fans, Kate and her team are under pressure to get results, and fast, but as they soon discover, the world of YouTube vloggers and social media is much darker than anyone could have imagined.

OH MY GOD – what a book!  I had been in a bit of a reading slump until I started Cut To The Bone and my mojo returned tenfold!  This book EXCITED me – right to the core of my being EX-CIT-ED!!  And the only debut this year that had me feeling this excited, was AA Dhand’s Streets of Darkness …until now, that is! Eeeeeek!

Set in London, the reader comes across corruption, politics, betrayal, oppression, obsession, power and the search for the truth. The world of vlogging comes to the forefront and there are puppet-master’s at play.  I found myself wondering who is pulling the strings and why!

The plot is fast-paced and really gets the heart racing.  It is one of those books you sit there and think “….just one more chapter, I can’t stop now!” – and you can’t because you just need to know what happens next.  The #Booms (twists) absolutely floored me.  The story is masterfully intertwined with various threads that really has your mind working on overdrive.  Did I mention this is a debut? Well OMFG you would never guess as the story-line, structure and characterisation are written as if by the hands of a seasoned writer – one who knows how to grab his reader and keep them hooked!

Another *Wow* for the characters in this book!  I won’t describe each and every one but do think a few need a mention for sure!

Zain Harris – haunted, flawed, a bit mysterious….loved him. #IMayHaveAnotherFictionalCrush!  – I was not sure what to make of him initially, but it all came together and I really was drawn in by his vulnerabilities.

DCI Kate Riley – oh! Oh! OH!  Can I be her!?  Seriously! Can I?  What a great backstory and such an interesting character on all levels.  I want to know everything about her.  She is a fantastic female lead: strong, flawed, a bit of a dark horse, not afraid to challenge but also chooes her battles carefully. Superb!!

Now Justin Hope….hmmmmm….I had so many questions about him.  Have to say I did not really warm to him and definitely felt that this guy was in it for himself…but everyone will have their own opinion, right!?

As for the baddie…oooooh it was clever!  Well played, Mr Caan….OMG, seriously well played….I did not have a friggin clue..and even when I did…you threw in a bit of organised chaos and I doubted myself.  Nice!!

So guess what….if you are looking for a spine-tingling, chilling, exciting, suspenseful read that will leave you gasping for more…then #BuyThisBook!  A definite #TopRead and #TopDebut for me!  Alex Caan….I am a fan!  Click the link and treat yourself to this fantastic and refreshing crime thriller debut!