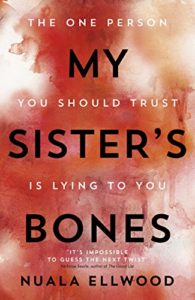 Kate Rafter is a high-flying war reporter. She’s the strong one. The one who escaped their father. Her younger sister Sally didn’t. Instead, she drinks.

But when their mother dies, Kate is forced to return home. And on her first night she is woken by a terrifying scream.

At first Kate tells herself it’s just a nightmare. But then she hears it again. And this time she knows she’s not imagining it.

What secret is lurking in the old family home? And is she strong enough to uncover it…and make it out alive?

My thanks to Penguin Books for an ARC of this book. *Happy Publication Day*

There’s a scream. You wake. You tell yourself it’s just a nightmare.  So why is there blood on your hands?

Set in Herne Bay, a seaside town in Kent – the reader is led down a path of unanswered questions, broken relationships, alcoholism, guilt, secrets, grief, mental health, the past and finally, closure.  It is a mine field of emotions that keeps hold of you every page you turn.

OMG…This is by no means a fast-paced story – it can’t be and this works well!  The book is told in three parts from different points of view and wraps up nicely at the end, without leaving the reader lost and confused.

Kate’s story – Part 1, is the longest and perhaps most in depth in terms of the story-line. It also includes the backstory and sub-plots so that the reader can follow without having to re-read.  I was interested in Kate’s experiences as a reporter and how this shaped her character.  Demons from her past still haunt her though and we see this manifest itself in her episodes of mental health issues.  Kate definitely intrigued me.  Her strength was admirable but also her downfall.  At times she seemed so cold and distant, it took me a while to warm to her.

Part 2- is from Sally’s (Kate’s sister) POV. Now THIS, for me was captivating!  In fact, I think I was drawn more Sally than I was Kate.  A lot of the family secrets come out but all is not what it seems.  And OMFG I was struggling for air with everything that was thrown at me – I mean, bloody hell….there were some shocking revelations! Paul, Sally’s weary but devoted (?) husband, is portrayed as her saviour of sorts.  He is the man trying to keep her together as she grieves for her mother.  He also supports Kate and tries to rebuild the broken relationship the sisters have. #PoorPoorSally – I mean this lady has been through the wringer and I really struggled to see how she was going to cope.  Already an alcoholic, feelings of jealousy and betrayal wrap themselves around Sally like a blanket to get her through each day.  Can she let go of the past and be the hero of her story?  No spoilers from me, I’m afraid!

Part 3 is the shortest of the book and basically brings all the loose ends together.  I really cannot say much, except that once again I was shouting “WTAF!?” and “Nooooooo” …. a lot!

Do I recommend this book?  Hell Yeah, I do! It was a captivating read that left me reeling.  The twists were superb and …well….slightly twisted! Just what I like in a thriller!  It is out now, so if you want to grab yourself a copy – click the link below!