Today is an awesome day for Blog Tours #bookjunkies!  First up this morning, my wonderful guest reviewer – Claire Knight, kickstarts Michael Fowler’s Shadow of The Beast with a cracking review! A huge thanks to the author and Caffeine Night’s Publishing for giving me the absolute pleasure of organising this blog tour and for providing the superb line-up of bloggers with an ARC! Right then, over to you ‘lil star! 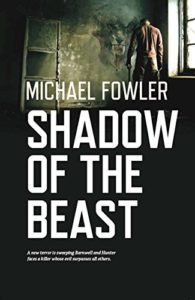 A new terror is sweeping Barnwell and Hunter faces a killer whose evil surpasses all others.
The discovery of a skeleton buried beneath the altar of an old chapel should not have raised an eyebrow, but this one was different. This one had been savagely murdered, and all the evidence points to the blood-thirsty killer the press have dubbed ‘The Beast of Barnwell’; a killer who has already served time for the brutal murder of a young girl and is now free.

Is this his handiwork?

In the midst of the enquiry, a 22 year old woman is abducted on her way home from work. Is there a link? To add to Hunter’s workload his former boss, Michael Robshaw, is deliberately mown down and left for dead.

In his search for the truth Hunter returns to his undercover roots – with deadly consequences.

The Shadow Of The Beast sees the return of Hunter Kerr and the team and they are hit with skeletons discovered as a derelict church is being demolished. Who are/were these skeletons and what happened to them?!

I was totally engrossed in the investigation. Was this Beast of Barnwell to blame for these skeletons or was it a copycat killer? I was desperate to know who the killer was and whether Hunter and the team would catch the perpetrator before another young woman faced the same fate.

I love reading places I recognise, some from getting the slow stopping train between Sheffield and Leeds and as the story went on, parts of Leeds started to appear.

This book shows the comeradery in the team. There’s the banter and rivalry I’d expect in any team but when one of their own becomes a victim, these guys really pull together to get justice.

I’ve read the short story, Reap What You Sow, which features our detective sergeant and I got the mental image of a rather sexy detective. Shadow of The Beast developed my mental image of Hunter, still the fearless crime fighter but with a softer side, showing his fatherly traits, going to the football with his sons.

Even though this is the 5th Hunter Kerr book, I didn’t feel I’d missed out by not reading the first four which I will be going back to read.

Big thank you to Michael Fowler and Caffeine Nights Publishing for sending me a copy of The Shadow of the Beast and for Noelle letting me open the blog tour!

Woohoo!  Thank YOU, Claire for a fab review and for starting this tour off with a bang!  Check out this book, and the rest of the #DSHunterKerr series by clicking the link below!