Wooohoooooo!  As a 👻Halloween special👻 #PartnerInCrime, I am thrilled to bits to have the spookilicious Donna Maria McCarthy! – –author of The Hangman’s Hitch and The Meddler.  If you click her name, it will take you to her amazon page *hint hint*

Time to get comfortable and sink your teeth into: Follow Me…..Follow You

‘What was that?’ The old woman, whose sandwiches had kept the party of tourists satiated, jumped as the coach veered and swerved, only just managing to avoid on comers.
‘Keep your seats! Please!’ Vernon, the middle aged tour guide, puffed out his chest, though ashen.
The loud crack, against the side of the coach, had terrified everyone, as they pulled into High Gate Cemetery.
Vernon, once again, took the stage, ‘Nothing more than I have come to expect!’
he said, raising an eyebrow along with a whoop from the crowd, who had been in his palm the whole journey…tales of Vampirism and sinister goings on that were never explained so well as they were by, Vernon, Vampire Hunter, Destroyer… Nemesis.
‘I have a nose for it!’ he exclaimed, wildly waving his arms about, a true evangelist…
‘And they for you, it would seem.’ came the voice from the shadowy figure that had lurked at the back; never speaking, not even to refuse a damp sandwich from, Edith, merely holding his hand up in disgust.
‘Tell me,’ he spoke again, ‘there are laws, are there not, protecting laws?’
‘You mean,’ Edith, eyed him warily, ‘that you believe Vampires are regulated by Brussels?’
Her banal comment made him chuckle, ‘If only from the Ediths and Vernons!’
‘Come along!’ Vernon hustled and bustled, ‘If we are to catch one of the beasts we must move fast and together… Crucifix?’
‘Check.’ replied his followers.
‘Holy Water?’
‘Check,’ all quite proudly showing him their armoury.
‘Stake?’ A rancid lump of meat was hurled from the back by the unenthusiastic stranger, and he gurgled with laughter as he stood up, towering over all and crouching as he quickly made his way through them, casting shadows on strained faces that could not take their eyes from him.
He pushed, Vernon, violently back and leapt from the coach.
‘Well!’ Vernon said as the others rushed to his aid, ‘How rude!’
‘A disbeliever, Vernon?’ Edith, wiped his face with her snotty tissue, which he pushed aside with repulsion.
‘Yes, Edith, and a fool!’ he called after the figure, with trembling lips, as it disappeared into the cemetery.
‘Come, come.’ Vernon, was braver than his limited mind would ever let him know, ‘Let us descend upon the creatures, the hour is late.’
‘And just about right.’ Edith said, excitedly.
Once again, Vernon, was irritated by the old woman, who insisted on stealing all the punchlines. He thought, he wouldn’t mind if she was taken, and shuddered at his own lack of social conscience.
The group huddled together, whispering fearful words and holding onto each-others jackets.
Vernon, opened the gates, the bewitching moonlight lighting their way and he suggested ditching the torches, his grievance being that, as a group they were not wholly embracing the experience, and that he had gone to considerable effort.
‘It is very cold, is it not? Vernon.’ Edith, came up beside him, shaking visibly, ‘Has been so long since I’ve felt warm, I am sure I cannot feel anything.’
‘Yes, Edith, but still.’ He threw up his arms in desperation. ‘You were very aware of the particulars of this experience, of the times, of the season… I must say that I found it a little embarrassing that a woman of your considerable years…’
‘Oh for sure they are considerable, Vernon,’ Edith, was enjoying the attention, even if it be from a numbskull, she wickedly thought.
‘Yes,’ he continued, irritated by her constant interjection, ‘That is all then, Edith.’ And he pushed her from him, petulantly, and stalked away from the group.
Confidence was not something he lacked, at least not here, amongst creatures he had never seen, nor in moments of introspection, really believed in… still those thoughts were shrugged off, put down to the lack of hard evidence and the endemic ignorance of the populous.
Looking back at his party, they looked diminished, ‘Edith!’ he cried, suddenly fearful but not of Vampires, of his reputation, his licence, all acquired through much brown nosing and studious research into who to apply this to. Terrified that she had fallen, frozen, or worse still a heart-attack, he rushed towards the group… there were many missing.
‘I thought I told you people!’ He looked crazed, almost on his knees, as they sheepishly encircled him, staring at the ground. ’Stick together, was that so difficult?’
They muttered responses, which only aggravated him more, ‘Edith, and the others? We must find them, mustn’t we? You bunch of idiotic misfits!’ But as he went to continue, a shrill cry almost stopped his heart. He crouched to the floor, ‘Heavenly Father, protect me, protect, Heavenly father,’ he went to pray again but stopped noticing, Edith’s Sketcher shoes and inflated ankles by his hand, and her teeth. He knocked her falsies from him, sending them flying, ‘Edith! You stupid, stupid old woman!’ he yelled, as he stood up as though he would hit her, hit it…
She stooped over him, snarling, teeth bared and screamed as her body convulsed, shaking with ecstasy as she tore at his flesh, the others shrieking and revelling in the carnage. Eyes rolled back she tore his heart from his chest and held it before him where he clung to his last few seconds of life, where his eyes and mind still knew fear.
‘Tut, tut, Vernon.’ The shadowy figure kicked his sprawling guts, with his boot, stretching out the sinew and grinding it into the ground, ‘Vindicated at last, but with none but us Vampires to see, it is as pitiable a discovery, as you.’
They delivered, Vernon, unto the nothing, ‘An utter bore,’ the shadowy figure clicked his teeth and saluted him, ‘You might still be alive, had your shadow been more worthy, than silly shapes under our beautiful moon.’

Eeeeeeek!  LOVE that!  Thanks so much to Donna and watch this space next week, for my review of The Meddler! 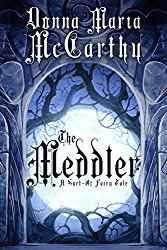 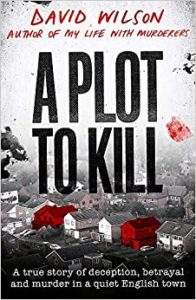