Absolutely THRILLED to be closing down A.J. Waines’ Inside The Whispers blog tour today!  Before I share my thoughts on this book though, how about we find out a little bit about the author!

AJ Waines has sold over ¼ of a million books worldwide and topped the UK and Australian Kindle Charts in 2015 with her number one bestseller, Girl on a Train. She was a Psychotherapist for fifteen years, during which time she worked with ex-offenders from high-security institutions, gaining a rare insight into criminal and abnormal psychology. AJ Waines is now a full-time novelist with publishing deals in France, Germany (Random House) and USA (audiobooks).

Her fourth novel, No Longer Safe, sold over 30,000 copies in the first month, in thirteen countries. She has been featured in The Wall Street Journal and The Times and in 2016 was ranked in the Top 10 UK authors on Amazon KDP (Kindle Direct Publishing). 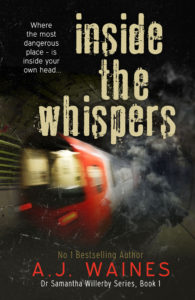 Where the most Dangerous place – is inside your own head…

Following a London Tube disaster, three traumatised survivors turn to clinical psychologist, Dr Samantha Willerby, for help – but she’s mystified when their stories don’t add up. Her confusion turns to horror when one by one, instead of recovering, they start committing suicide.

When her partner, Conrad, begins to suffer the same terrifying flashbacks, Sam is desperate to find out what is causing them and a mysterious and chilling crime begins to unravel.

Then the flashbacks begin for Sam…

The first book in the Dr Samantha Willerby Series, INSIDE THE WHISPERS is a tense, haunting Psychological Thriller that will leave your nerves in shreds.

My thanks to the author for an ARC of this book, in exchange for an honest review.

No Longer Safe has been one of my all time favourite, blow your mind kind of reads for 2016! You can read my review here.  So when the author approached me to read Inside The Whispers, well OMFG there was NO WAY I was going to say no!

Set in London, the main theme within this book is manipulation of the mind and how past trauma, broken trust, loss, relationships and distorting reality can be used to literally mess with a persons mind.

The storyline intrigued me from the start.  Although I would not describe this as a fast-paced novel, it was gripping enough to keep me turning the pages and wanting more!   There were a few strands placed within the main story that tied up just nicely at the end and added to the shockers revealed as the story unravelled.

This novel was rich with characters, each one bringing something original to the main storyline.  A few stood out more than others and some of my faves included: Sam (the main character) because my feelings about her were mixed!  At times she came across as strong and determined but then she kind of changed into an annoying and somewhat desperate individual who I wanted to scream “Just Say It!” at, for example, with her boyfriend Con.  Maybe it was just me! ?

Mimi/Miranda: even at her worst, this character is likeable!  She came across as lost but courageous; vicious but vulnerable and dishonest but trustworthy.  How could that be!? I was desperate to know more about her story and although my suspicions were finally confirmed – it was still a moment that left me reeling.  I mean, WTAF?

Con & Leo: Both of these characters, frankly, annoyed me! There was a desperation/clinginess to them both that left me with mixed feelings. Yet, their purpose within the pages made sense…so I tolerated them! Ha ha!

What I liked about this book was the way it held my interest and really showed me how easy it can be to mess with someone’s mind.  And THAT #bookjunkies – is pretty damn scary!  The story left me questioning people’s motives and intentions and seriously made me wonder about how easy people can be sucked into situations almost without their express consent.  Yes…AJ Waines has blown my mind for a second time, thankfully not as badly as No Longer Safe….I still am recovering from that 10 months later but  I am beginning to worry about this author and her background in Psychotherapy! Is she using it for good or evil!? ?

Do I recommend this book?  Hell Yeah, I do! If you are looking for a psychological thriller that will disturb you, make you question people’s intentions and is full of pretty twisted OMFG moments, click the link and grab yourself a copy!

3 Replies to “Inside The Whispers *Blog Tour* ~ Review”