This post should have been up on Wednesday, but real life took over and I am absolutely mortified!  So massive apologies to J.A. Schneider. 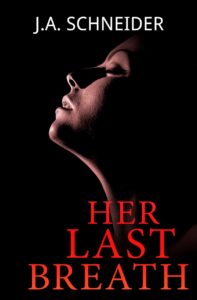 Synopsis: A chilling psychological thriller, titled HER LAST BREATH, about a woman caught between two men…

Mari Gill wakes to horror in a strange apartment next to a murdered man. Protesting her innocence, she feels torn between her husband, a successful defense attorney, and a mysterious, kind man who wants to help. Can she trust either of them – or even her closest friends? Detective Kerri Blasco, investigating, battles her police bosses believing that Mari is innocent…but is she?

“I’m getting cynical.”
“No you’re not.”
“Yes I am. Hard and cynical, starting to feel burnt out.” Kerri watched her feet move across the linoleum, red and white squares like a hellish chess board. Ridiculous flooring for a hall in the morgue, someone must have thought they were making the place cheerier. Kerri hated trips to the morgue. It was cold down here and she huddled into her parka. Moisture sheened the ugly white wall tiles and stacked aluminum caskets and shrouded gurneys with tagged toes sticking out. These city people had probably spent their lives waiting in line. Now they were waiting for the medical examiner.
“You’re too young to feel burnt out,” Alex muttered.
“Promise me a beer after this?”
“Deal.”

For two of the finest detectives of the NYPD, that conversation is their Bitch and Moan time. Kerri Blasco and Alex Brand are partners who know each other’s pain. Bitch and moan and sometimes tears – lots of tears – are a big part of their relationship. You’ve probably already guessed that they love each other…I didn’t have to tell you, did I?

Because it’s there, right there in the dialogue. Speaking for myself, I wrote that exchange and edited and re-read it a hundred times, and it still gets me all emotional.

Anton Chekhov said, “Don’t tell me the moon is shining; show me the glint of light on broken glass.”

Well, that scene in Her Last Breath, between two cops about to watch a murder victim’s autopsy, isn’t about moonlight or thunder crashing or the frightening sound of a floorboard creaking – but the Don’t Tell, Show rule also applies to developing character. And come to think of it, showing the glint of light on broken glass is still (sorry Anton) about surface.

To develop characters, we have to go deep, really deep into how they feel. That, it took me too long to discover (and I’m still learning!), and it’s about ninety percent of the job. The best characters are those who relate convincingly not just to their world, but to one another. And while plot is important, if the characters don’t grab readers, the book usually won’t either. It’s fine if you want to give characters’ brief physical descriptions…but what they love, loathe, fear, and their personal flaws or demons are what fill out the mannequin, make him or her human and someone we can relate to. So many times I’ve heard readers say, “How I love that character! S/he’s more real to me than people I know in real life!”

That’s because, in real life, you don’t know most people. You can’t, because they hide their feelings, don’t want to bother you or face bad stuff or embarrass themselves, so too many conversations are superficial; small talk is small indeed. “Have a nice day!” “Nice to see you!” “Thanks, your lawn’s nice, too.” How we crave real human connection, finding feelings deeper than what’s in daily mundane life.

Wonderful characters in books become our friends. In their introspection you can both lose yourself and find yourself.

Key word, introspection. Shakespeare was a master of introspection, but your portrayals don’t have to be soliloquies. Today it’s called inner monologue. We all think to ourselves – on the page, that’s what inner monologue is. You’re reading the character’s thoughts, his or her fretting about fear, pain, doubt, worry, and your heart catches when you see him or her storming to get a grip! But how? His MOTHER rules in this house, and HE’S always on her side, and we really shouldn’t fight in front of the kids ‘cause then they cry and everyone will be yelling and crying and it will be my fault!

There. An improv little stream of consciousness from an unhappy housewife.

Or: “Here’s his ball back,” she told the mother, studying the child harder. He looked frightened, downcast and even undernourished, but should she say something? What? They were in a park and the mother was smiling benignly like any of the mothers and what could she tell a cop? That child looks afraid? What to do, what to do?

In Her Last Breath and, previously, Fear Dreams, what makes Detective Kerri Blasco unusual is her intuition, her rare ability to read people. Here is a scene where Kerri interviews Mari Gill, out on bail for second degree murder, and Mari’s husband Ted Curry, a successful defense attorney.

“Hello again,” she said, extending her hand. Her free hand held a manila folder.
Ted Curry wore the look he’d worn in that Facebook photo instructing his wife how to hold a fishing rod. Mari Gill looked…limp; not uptight with darting eyes like what they usually saw coming through here. Kerri’s gut instincts, as always, stayed big on first impressions; and here were her second and third impressions matching the crime scene, the hospital, and now here – to be filed away with the rest on what she called her mental clipboard.
Her clipboard was busy. She pointed then followed them past busy desks to a hall and then an interview room; offered them something to drink which they declined with stiff thanks. Ted Curry was taciturn, sitting granite-faced with his arm draped across the back of his wife’s chair…but Mari Gill looked around; seemed to come out of her daze a little as she looked at the thumbtacked police posters for charity softball games and NYPD youth programs and HIV avoidance. Her gaze stopped, blinking, on a poster-sized photo of a mother cradling her bleeding child, with the caption, SAVE YOUR NEIGHBORHOOD.
Opening her manila folder, Kerri saw Mari Gill’s eyes fill, still fixed on that poster and the bleeding child. Ping! went her mental clipboard counter: she feels for others despite her problems. Not the response of a murder suspect, Kerri thought as she spread print-outs before her. Still, there was this business of her text, phone call and email to the murdered man…

Above, it’s all introspection, inner monologue that makes us feel. We’re hooked, caught up to read more…but we only follow if we care about the characters.

A huge *Thank You* to the author for this interesting read on characters….my favourite topic!!
Her Last Breath is available now.