Today I have not one, but TWO guest review posts from the lovely Claire Knight!  She has read Mary-Jane Riley’s Alex Devlin series back to back and here are her awesome reviews!! 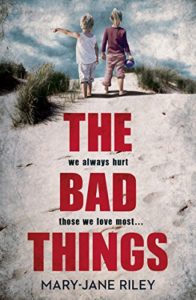 Now Jackie Wood, jailed as an accessory to the twins’ murder, has been released, her conviction quashed by the Appeal Court. Convinced Jackie can reveal where Millie is buried, Alex goes to meet her.

But the unexpected information Wood reveals shocks Alex to the core and threatens to uncover the dark secret she has managed to keep under wraps for the past fifteen years. Because in the end, can we ever really know what is in the hearts of those closest to us?

I didn’t know too much about The Bad Things before I picked it up. I’d bought it shortly after it was released last summer but didn’t get round to reading it. It must have appealed or I wouldn’t have clicked it! But then I met the author at the Old Peculier Crime Writing Festival this year after which she got in touch with CrimeBookJunkie asking for a review of her second book, After She Fell. The lovely Joseph Calleja of Read and Relax Book Reviews recommended I read The Bad Things first and I’m glad I took his advice! If you read After She Fell before The Bad Things, there are spoilers and no one likes a spoiler!

The Bad Things is a sinister tale all linked to the disappearance of Alex’s niece and nephew 15 years ago. Her nephew’s body was found but the little girl was never found. A heartbreaking situation for any family. A couple were convicted of the twins’ disappearance but they always professed their innocence. Now 15 years on, the only surviving culprit has had her conviction quashed and freed.

At the back of my mind, I thought Alex had something to do with the twins’ disappearance. I didn’t like to think that as I quite liked Alex as a character but there was something niggling in my brain. But the story developed and revelations started, I began to doubt the other characters and question their involvement both in current events and the historic disappearance.

I thought the author handled Sasha’s state of mind very well. Sasha is portrayed as the grieving mother, pushed over the edge by not being able to bury her daughter and having to live with the constant memory of losing her children. I can’t imagine how I’d react if it happened to me so depression doesn’t seem out of the question!

To kick the Alex Devlin series off with a story that involves our protagonist and her personal life gives you a real background to the character. Hopefully there will be more to come from Alex and maybe the mysterious Malone – obviously I know there is After She Fell…it makes a refreshing change to have what is a crime investigation carried out by an investigative journalist.

I’d recommend to anyone who likes a good crime thriller!

Awesome possum!  I am intrigued already!  Now let’s check out Claire’s thoughts on the latest in the series! 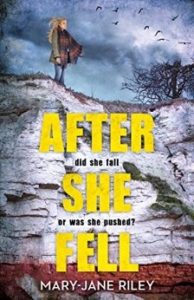 There are so many ways to fall…

Catriona needs help. Her seventeen-year-old daughter Elena was found dead at the bottom of a cliff near her boarding school. The death has been ruled a suicide, but Catriona isn’t convinced.

When her old friend, journalist Alex Devlin, arrives in Hallow’s Edge to investigate, she quickly finds that life at private boarding school The Drift isn’t as idyllic as the bucolic setting might suggest.

Amidst a culture of drug-taking, bullying and tension between school and village, no one is quite who they seem to be, and there are several people who might have wanted Elena to fall…

I finished The Bad Things, the first Alex Devlin book and dove straight into After She Fell, I didn’t even stop for a breather!! After She Fell takes place a couple of years after the events of its predecessor so Alex’s life has changed, she’s moved to London, new job and her son has gone travelling. As she reconnects with an old school friend whose teenage daughter Elena recently died in suspicious circumstances, we learn a little more about Alex’s past. But unlike The Bad Things, this story isn’t so much about Alex, it’s about Elena.

As Alex goes investigating the teenager’s apparent suicide, the story time-jumps back and forth to the weeks running up to the unfortunate event. With each chapter both in the past and the present, there are hints as to what happened to Elena but as with all good thrillers, you have to wait for the grand reveal when Alex has put all the pieces of the jigsaw together. Alex doesn’t realise what nerves her prodding and poking will hit, creating a more of a sinister feel to the story! You prod a beehive, you’re going to get stung…

I highly recommend reading The Bad Things before After She Fell. The latter can be read as a standalone however there are references to events in the former which would spoil that story and as I said in my review for The Bad Things, no one likes a spoiler! I really enjoyed After She Fell, I felt it was better than its predecessor. I really didn’t guess what was going on until it actually happened! Plenty of intrigue to keep me addicted!

I do hope we see more from Alex Devlin, there are things in her personal life I want to see develop and I really enjoy reading about a journalist investigating crimes!

A big thank you to Mary-Jane Riley for sending me a copy of After She Fell. It was the first paperback I’ve read in over five years and has reignited my love for physical books.

Both great reviews and definitely sounds like a series to be added to the TBR!  Click the links below to grab yourselves a copy!

One Reply to “The Bad Things & After She Fell: Claire Knight ~Double Guest Review”