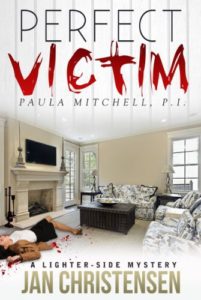 A few days after Sylvia Leominster is murdered, private investigator Paula Mitchell interviews Sylvia’s fiancé in their small-town Rhode Island jail. Warren Wade’s fingerprints are all over the murder weapon, he has no alibi, and Sylvia broke up with him the night she was killed. After another young woman friend of Sylvia’s is bludgeoned to death, Paula is dismayed when the police keep Warren in jail. They claim the second murder could have been committed by a copy-cat and remind her Warren’s fingerprints are still on the weapon that killed Sylvia.

Working with her best friend who often hires Paula to investigate cases and who is Warren’s lawyer, Paula searches for answers. Paula and her computer guru lover narrow down the suspects to the victim’s friends. The group is led by a mesmeric young man with political ambitions. Paula doesn’t trust him, especially when she learns that all of Sylvia’s friends have lied during her interviews. At the preliminary hearing, some answers begin to emerge. Paula zeros in on the killer and sees firsthand how friendship and loyalty can be used for personal gain. With Warren’s freedom on the line, she has to find a way to capture the real killer. But in doing so, she doesn’t realize she’s putting herself and her own best friend in danger.

Perfect Victim is a crime thriller of a young woman, killed in her own home and her recently ex-boyfriend arrested for the crime. Paula Mitchell PI is working with his lawyer to clear his name.

There were plenty of suspects to pick from to start with and as the story goes on and Paula Mitchell asks more questions, unlike some detective stories, I wasn’t able to narrow down to a single suspect.

Personally I didn’t warm to Paula as a character; I can’t quite put my finger on why but she wasn’t one of my favourite investigative characters.

Private Investigators in the States are different to the UK. Thankfully by the magic of TV, I have learnt the difference from The Good Wife with the tenacious Kalinda Sharma and rugged Jason Crouse. They’re less Cameron Strike or Jackson Brodie and more private cops who work for legal firms.

The book was good but not an outstanding read for me. There’s a steady pace and enough intrigue to keep my attention; I could imagine it being made to a TV movie.

Thank you to Victory Publishing and Netgalley for giving me this book in return for my honest review.

Thanks Claire for a fab review!  If this book is your kind of read, click the link and grab yourself a copy!