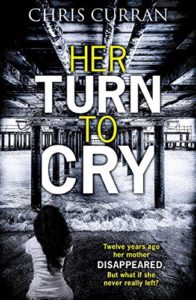 Twelve years ago Joycie Todd’s mother abandoned her. But what if she never really left?

When she was eleven, Joycie’s mother disappeared. Run away with another man, so everyone says. But Joycie can’t forget the thumps she heard in the night, or the bloodstained rug hidden under the bed. A rug that was gone the next day.

Twelve years later, Joycie has left her past behind. But when an old friend dies, Joycie is left a letter beseeching her to find out the truth. Unable to keep the door locked any longer, Joycie sets out to discover why her mother left her – if she ever really did.

As she travels to the shabby seaside towns of her childhood, Joycie soon finds that it’s not just her mother who vanished all those years ago. Joycie knows the disappearances are connected, she just doesn’t know how. But there’s someone out there who does – and they will do anything to keep it buried.

When I saw pictures of this book on Twitter, I was immediately drawn to the cover.  Huge thanks to the author, Chris Curran and Killer Reads for sending me an ARC in exchange for an honest review.

The story starts off in London and we flit between the city and the seaside towns where Joycie spent her childhood in a sort of Vaudeville background.  It is not a modern day tale, instead taking us back to the late 50’s and 60’s and this came across in the descriptions and character’s speech and language.

Within the pages it is clear that Joycie is searching for the truth, wanting to right past wrongs whilst uncovering and facing secrets she had long buried.  Love, friendship, revelations and loss also feature strongly.  This story had a murder-mystery feel mixed with a touch of psychological drama.

There were a lot of characters in this story and the pace was a little bit slow, but felt right for the plot.  This is not a high octane read – it is more one for a relaxing Sunday where you can just kick back and absorb yourself in the story.  Joycie was distinctive, determined while remaining vulnerable in her strength.  Her demons were scratching the surface and needed to be exposed for her to uncover the mystery behind her mother’s disappearance.   Marcus was  slightly annoying in his undying dedication, however, it surprisingly works to his advantage.  Admittedly, he sort of grew on me in the end.

Parts of this story were also quite sad.  Particularly her father’s story and the experience he had and this is intertwined with Dennis’ story-  also very sad.

I really liked Bill, the baddie! What does that say about me? ? Working as a “heavy”, there is just something likeable about him. Despite his “job” he sets out to make sure Joycie doesn’t get harmed while on her journey for the truth – does he succeed?  You will have to read the book to find out!

I am not sure that I bought the motive or big reveal and perhaps that is because I sort of sussed out parts of it before the big reveal.  There were some good twists, red herrings and surprises which did keep me interested despite any small reservaions I had.

For ayone who enjoys a murder mystery or crime drama, this book would be right up your street.  I thoroughly enjoyed reading it and will keep my eye out for future books from this author….In fact, I downloaded her first book too!  Click the link for your copy of Her Turn To Cry.