Eeeeeeeeeeeek!  I am absolutely thrilled to be hosting the fantabulous Michael J Malone’s  A Suitable Lie blog tour today!!  This is one of those books that stays with you and leaves you thinking…Check out my review below for more! 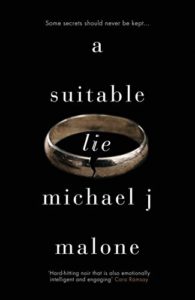 Some secrets should never be kept… Andy Boyd thinks he is the luckiest man alive. Widowed with a young child, after his wife dies in childbirth, he is certain that he will never again experience true love. Then he meets Anna. Feisty, fun and beautiful, she’s his perfect match … and she loves his son like he is her own. When Andy ends up in the hospital on his wedding night, he receives his first clue that Anna is not all that she seems. Desperate for that happy-ever-after, he ignores it. A dangerous mistake that could cost him everything. A brave, deeply moving, page-turning psychological thriller, A Suitable Lie marks a stunning departure for one of Scotland’s finest crime writers, exploring the lengths people will go to hide their deepest secrets, even if it kills them…

I was so desperate to read this book, I could not even wait for the ARC I was being sent from the lovely Karen Sullivan/ Orenda Publishing!  Instead, I immediately purchased the kindle version and began to read the second it arrived! Talk about a great opening!  I was instantly hooked and wanted more!

Michael J. Malone has taken a tough and often hidden issue and tore it wide open….but not how you may think! Set in Ayr, Mr Malone weaves the threads of trust, loss, anger, control, jealous, resentment, past trauma and questioning the norm throughout the pages of this story.

There is a raw realism that really turns the topic of domestic violence on it’s head.   I work with both victims and perpetrators of domestic violence  and I am often shocked at the lack of understanding when it comes to male victims.  It is real people!  Violence is violence no matter the gender of the individual on the receiving end! *steps off her high horse* – sorry, but it had to be said.

The pace is perfect for the story and builds up to the climax so we are left gasping for air.  I tried to figure out the twists, but Mr Malone played a few cards that threw me right off track!

The main character, Andy is believable, strong, vulnerable and controlled.  Controlled in his determination of NOT using violence as a defence but also by his wife, Anna – who displays all the signs of a domestic violence perpetrator.  The shame, excuses, willingness to forgive are all classic examples of victims of DV – however, rather than being a woman, as we would all expect – Mr Malone shows courage in talking about a subject that is rarely ever spoken about!  Superb!!

Anna is troubled, and initially very likeable – charming, alluring and easy to forgive.  She says all the right things to keep Andy under her control.  It is all about power and instrumental violence and this woman uses whatever means necessary to get what she wants.  Manipulative, deceitful, making sure Andy is all hers – even if it means using emotional blackmail at the expense of Andy’s son.  What an evil cow! ….sorry, it just had to be said!

There are other strands within the plot which intrigued me and kept me guessing – all the while being interlinked so we don’t lose sight of the plot.  This book exposes the truth we sometimes close our eyes to.  Truly magnificent; a superb piece of writing with twists you won’t believe!

Guess what, #bookjunkies….this is definitely one of my Top Reads of 2016! (That is two for you Mr Malone! Woohoo!) I cannot recommend this book enough!  Head on over to amazon via the link below and download this #badboy – you won’t regret it!