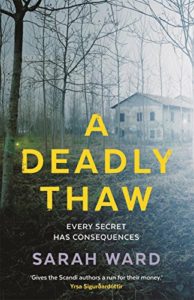 Every secret has consequences.

Autumn 2004
In Bampton, Derbyshire, Lena Fisher is arrested for suffocating her husband, Andrew.

Spring 2016
A year after Lena’s release from prison, Andrew is found dead in a disused mortuary.

Who was the man Lena killed twelve years ago, and who committed the second murder? When Lena disappears, her sister, Kat, sets out to follow a trail of clues delivered by a mysterious teenage boy. Kat must uncover the truth – before there’s another death . . .

I received an ARC of this book from Faber & Faber Publishers / Sarah Ward, in exchange for a honest review.

First and foremost, a huge thanks to Sarah Ward for asking me to be a part of this blog tour!  A Deadly Thaw is set is Derbyshire and sees the themes of secrets; conflict; the past; love; assumptions; anger; rape and abandonment seamlessly flow throughout the pages.  There was so much more, however, I just thought I would pick out the few that struck me as constants.

This is one of those books that stays with you.  The opening chapter is absolutely brilliant with breathtaking suspense that kept me hooked and wanting more!  In fact, each chapter seemed to cause an OMFG to pass my lips….seriously!  It was just THAT good!

A fast-paced, gripping story-line which had me questioning everything I came across and everyone I “met” as a reader.  And it was clear from the very start that things are not what they seem – only we just don’t know why!  The reader is cleverly drip fed clues and red herrings so that even when you think you know what is going on…BOOM…the author throws another spanner in the works!  Well played!

So now, my favourite part: Characters of course!!! I thought that Lena Fisher was the main character of this story based on the blurb, however, for me it was her sister Kat that really had the main part in the  story.  I can’t really say much about this, as I might give away a few spoilers …and I do not want to do that!  Lena is a strange one – she almost comes across as cold, hardened but clever.  However, given her experience I think that is totally understandable.  Her sister Kat is supportive, strong and I would like to say fearless in her quest for the truth.  Mark is also a great character and I struggled with trusting him.  I love when a book evokes these feelings in me!  Daniel Frears is another character that stood out – I mean, what is his story!?  He reveals a lot about Lena that the reader learns through Kat.  There is an air of mystery about most of the characters in this book and as pieces of the puzzle are revealed, you get sucked deeper into the plot. I could go on about some of the others: Andrew, Peter and Mary for instance…but I would rather you find out for yourselves!

Although I have In Bitter Chill on my kindle, this is the first book by this author I have read!  Needless to say – it will NOT be the last.  Does it get a Hell Yeah recommendation from me?  You better believe it does!  If you want a page-turning, cannot-put-this-book-down read, click the link below!  It will be well worth it #bookjunkies!

One Reply to “A Deady Thaw Blog Tour: Sarah Ward”