Woohoo peeps!! My fabulous guest reviewer, Claire Knight, has an awesome review of Adam Maxwell’s The Dali Deception…..and I am pretty sure she loved it! 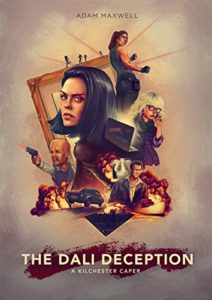 Five criminals. Two forgeries. And one masterpiece of a heist.

Violet Winters—a professional thief born of a good, honest thief-and-con-artist stock— has been offered the heist of a lifetime. Steal a priceless Salvador Dali from the security-obsessed chairman of the Kilchester Bank and replace it with a forgery.

The fact that the “painting” is a signed, blank canvas doesn’t matter. It’s the challenge that gives Violet that familiar, addicting rush of adrenaline. Her quarry rests in a converted underground Cold War bunker. One way in, one way out. No margin for error.

But the reason Violet fled Kilchester is waiting right where she left him—an ex-lover with a murderous method for dumping a girlfriend. If her heist is to be a success, there will have to be a reckoning, or everything could go spinning out of control.

Her team of talented misfits assembled, Violet sets out to re-stake her claim on her reputation, exorcise some demons, and claim the prize. That is, if her masterpiece of a plan isn’t derailed by a pissed-off crime boss—or betrayal from within her own ranks

If you can imagine Oceans Eleven (the George Clooney/Brad Pitt ?? version rather than the 1960s original with the Rat Pack of Sinatra, Martin and Davis Jnr – not that there is anything wrong with the original; we just need the gadgets and tech of the 21st century) and replace the backdrop of Las Vegas with a fictional metropolis in the North England, then you’re half way to the perception I got reading The Dali Deception … Conmen (and women), pick pockets, hackers, grifters…just like the crew from Hustle.

It’s unusual for me to read crime without the focus being a murder.  This book is all about the con with the odd interlude from a proper gangster.

The story is set in the fictional city of Kilchester somewhere in the North of England; the author has used the location in some of his other stories so I’d like to think he knows the place fairly well. I needed to keep reminding myself it’s in the UK, the book has a definite feel of being stateside and I imagined some scenes being played out under clear blue skies and glorious sunshine which even by the biggest stretch of the imagination doesn’t happen much in Northern England especially in September when the book is set. Saying that, as I was flicking through writing my review, it does start to rain on Zoe at one point…

The characters are great – the author brings them to life in the description he uses or makes other characters use:

Katie “a giant” and “golem” (not the Lord of the Rings Golem but the golem from Jewish legend – if you’ve seen Dogma (which I love) the Golgothan is a golem summoned by the demon Azrael, modelled out of poo).

Barry is the “finest wheelman” and “knows his stuff, does Barry”…..

The ending put a smile on my face and I so want to hear more about the capers Violet and the others get into!

Wow #bookjunkies!! I don’t know about you, but I am certainly intrigued! Thanks Claire for a fab review!! Click the link below for a quick trip to amazon…