OMFG!  This month I am thrilled to have TWO authors in my #PartnersInCrime feature!  Today is the superbly splendid Gordon J Brown <G.J. Brown> !!!   Can you believe it!  Grab a coffee/tea; take a break…sit back and enjoy Tick. Tock. – it bloody rocks!! 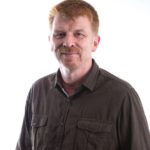 G. J. Brown (Gordon) lives in Scotland. He’s married with two children. He has delivered pizzas in Toronto, compered the main stage at a two-day music festival, floated a high tech company on the stock market and was once booed by 49,000 people while on the pitch at a major football Cup Final. He is a DJ on local radio and helped found Bloody Scotland – Scotland’s International Crime Writing Festival.
Gordon has been writing since his teens and has four crime and thriller novels to his name – Craig McIntrye appears in three books –  ‘Darkest Thoughts (Feb 2017), Furthest Reaches (Sept 27th – this month) Deepest Wounds (Feb 2018). All published by Strident.

Craig McIntyre, the protagonist in the short story Tick. Tock. – and the novels Darkest Thoughts and Furthest Reaches (and Deepest Wounds – due out 2018) was born in a pub on the south side of Glasgow – not literally nor in a fictional sense but he was conceived in my head, on a Friday night, with a pint in my hand. A friend and I were enjoying a quiet drink in a quiet bar. The bar was all but deserted. In one corner was a man, maybe late thirties, dressed in jeans and t-shirt, sitting at a table reading a paperback. In another corner were two brothers, both drunk as skunks. My friend and I were leaning on the bar when the brothers decided that a fight was a good idea. Being so drunk the fight was a lot of swinging and a lot of missing. As my friend and I watched they trashed the pub, leaving a trail of broken glass, tables and chairs without inflicting much damage on each other. They circled the two of us – turning the whole thing into a bit of theatre for two mates on a night out. When the police arrived to lead the brothers away we returned to our pints.
During the whole fight the man with the paperback never lifted his eyes from his book. Nor did he look interested in the violence around him. He looked, if anything, as if this was all quite normal. That got me thinking. What if this was normal for him? What if his life was blighted by the outbreak of unexplained violence, him always at the centre. Then I took the idea a little further. What if he caused the violence? What if he brought out the worst in people? What if he, and with no idea how, dragged deep help animosity out. Magnified it. Turned it into something dark. Transforming people’s darkest thoughts into action.
And so Craig was born. His life a series of uncontrollable events that leave a trail of destruction. A man who, with a little imagination, makes for a great assassin – after all put him a room with whoever it is you want to die and stand back. If they kill each other – who is to blame? Craig? Who? And so Craig spends his time on the run – being hunted by those that would use him to help them kill their enemies. This is Craig McIntyre’s world.
Tick. Tock. is the first short story Craig has appeared in – if you want to know more click on www.gordonjbrown.com.

EEEEEEK!  How awesome was that?!  A HUGE thanks to Mr Brown for this and I cannot wait to get stuck into the novels!

In a few weeks time, I am absolutely over-the-moon that my bestie, THE Michael J Malone, will be doing a Q&A with me as my #PartnerInCrime. Woohoo!! *insert happy dance* ?