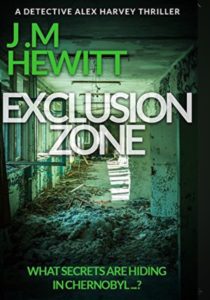 On 26th April 1986, reactor four exploded at the factory in Pripyat, Chernobyl.

At the same time teenager Afia Bello vanished from her home without a trace.

The damage from the nuclear fallout is examined over the following weeks, months and years by Afia’s younger sister Sissy, as she unwittingly uncovers clues relating to her sister’s disappearance, and the secret life that Afia kept hidden from her family.

In the summer of 2015 Private Detective Alex Harvey is hired to investigate the disappearances that have been occurring within the exclusion zone.

He can think of only one person to bring along with him to help; Ukrainian national Elian Gould.

Elian – who was adopted at birth – has her own reasons for accepting the job; namely to search for her own family history which has always been a mystery to her.

But the remaining citizens of Chernobyl are hiding their own secrets and with a darker force at work, the missing person’s case suddenly turns into something much more serious…

Exclusion Zone is J.M. Hewitt’s debut crime novel, the first of the Private Detective Alex Harvey series and OMFG what a debut it is!  I absolutely devoured this book in a matter of hours and that is saying something, considering I work full-time!

The setting of this book spans between the UK, Kiev, and Pripyat, Chernobyl in the main. Seamlessy sewn within the pages are a number of themes, and those which stood out to me the most included: hope; the explosion in Chernobyl and the effects that had mentally on those who lived there at the time; abandonment; corruption; secrets of the past & present; justice and love in a variety of forms – some twisted, some sweet, some unrequited.

The EEEEEK’s and OMFG’s started early on in this book for me….and actually, if I am completely honest, I am not sure when they stopped! The author had me hooked from the start and I was gutted when it ended as I just wanted MORE! MORE! MORE! Now THAT is how you write crime fiction!

There was a strong but deliciously twisted plot-line that kept me enthralled throughout and this …hmmmm….what I guess I would describe as a strange air of mystery hung over each chapter, which I found almost haunting.  Ooooooh it was so good! I just did not know what to expect!

But the characters….*WOW*….. I adored, abhorred and at times I was allured by the multi-faceted individuals who adorned these pages.  Each one of those who played a part in the unfolding of this story had something unique to them which kept me interested.  Characters are a make or break for me in novels — and let me tell you….I-was-not-broken!  I won’t go into each and every one in depth, but I do need to point out the five which have been burned into my mind and perhaps the other two or three….ok..ok…there were oh so many!  I will leave it at five….

The first two, we meet at the start: Elian Gould and Alex Harvey.  For someone so young, Elian has an almost old soul but magnificent will and determination that has the reader desperately urging her on.  Then Alex-  at first I thought he might be a bit of a pompous arse if I am honest – but *shakes head slowly side-to-side* I was oh-so-wrong.  He has a fiery personality and a kind heart that sees him wanting justice for those who were wronged.

The next two that I cannot get out of my head are “The Boy” – he has a name, but you find that out later on — this guy…WTAF?! Talk about a dysfunctional family background!  And for me, the nature vs nurture debate in criminology immediately popped into my head.  WAIT until you come across him….Twisted is a compliment!  Afia – she is a little bit messed in the head but there is a vulnerability about her – Despite her flaws, I really was drawn to her.  And finally, Sissy, Sol and Klim – they are like a threesome gone wrong – intertwined stories where sadness oozes from their pores….and yeah…I know that was seven….what can I say….?

I am going to have to end it here, or this will become a novella.  All I can say is, when …not if…when you do decide to pick this up and read it…make time for it as (a) it deserves your full attention and (b) you will not want to put it down.

One Reply to “Exclusion Zone ~ Review”