I am absolutely THRILLED to bits that Andy Rivers agreed to a Guest Author Post this eve!  Why you may ask? Well not only does this guy write great books,  he is so supportive of authors and bloggers that he deserves a MAHOOSIVE thanks for all the work he does!  Simply put, this guy friggin ROCKS! 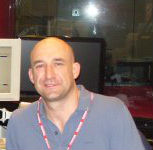 Andy Rivers has been a Butlins Barman, pretend chippie on a Spanish construction site, coach holiday rep, mobile sandwich salesman and outdoor traffic cone washer to name but a few of his eclectic ‘career’ choices. He decided to pursue his long held dream of being a writer after reading ‘Trainspotting’ and realising that they were now allowing council estate lads to have pens as well!

The Evolution of Byker Books ~ By Andy Rivers

I started Byker Books back in 2008 with a vague notion of publishing the working class lads and lasses who weren’t taken seriously by the big publishers or agents. The people who didn’t have degrees in ‘creative writing’ but had rubbish jobs that sapped their souls instead, the people who didn’t have a ‘journey’ to bore people to death with but did have an idea for a bloody good story that other people from the council estates would enjoy, the people who didn’t get glowing reports at their great schools but instead had to battle their siblings for the one pen in the house to write anything down before doing their paper round in the rain.

That’s who Byker Books was for. People like me.

It was never about the sales or the money, it was never about slavishly trying to perfect SEO on a glorified search engine named after a river in Brazil (work it out) and it was never, ever about shafting the writers for profit – Byker Books was different to the others. During it’s lifespan my tiny independent press published over one hundred previously unknown authors through the urban, short story ‘Radgepacket’ collections (some of whom went on to get book deals elsewhere) put out twelve paperbacks and published a number of others via electronic means. At the time it was a much needed initiative for the kind of writer that I’ve detailed above but the advent of mass-market self-publishing of e-books has pretty much negated any need for that any more and it became impossible for me to continue in the same vein as before.

So, writers publishing themselves and everyone getting a look in – so far so good right?

Well no, not really.

The problem now is getting your book seen by the book buying public and raising the profile of the author. How do you get people to read the interviews you’ve done on blogs and the reviews your book’s getting? As an author myself I’ve spent a lot of cash on different promotional methods with varying degrees of success. The truth is that there isn’t one method that’ll propel your sales through the roof and a lot of the better ones are getting very picky indeed about who they let pay through the nose to ‘use’ their services. I don’t know about you but I stopped reading emails from marketers some years ago as well, so when the promo companies tell you they’ve got lists of thousands of readers in different genres then you shouldn’t get too excited. I knew I wanted to do something different from the tired old email blast that screamed ‘please buy me’ in desperation.

With that in mind I was sure there had to be a way to stand out from the ever-increasing crowd – if only a little bit. I wanted to do something that readers would buy into of their own accord, something in the style of the aforementioned ‘Radgepacket’ books that would mix stories of the ‘celeb’ authors and the indies.

That’s where I came up with the idea of ‘BookD’.

It’s a regular digital newspaper that collates great content and stories from the world of books. I conceived it a while ago and brought a development version to life a few months ago and now it’s going from strength to strength. Word of mouth recommendations combined with a strong social media campaign have seen an ever-growing number of repeat visits as it becomes ever more popular. It’s well laid out, great on the eye, has excellent social sharing options and is actively sought out by people who read, buy and love books. In short, any author’s target audience.

The format is such that, going forward, I’ll be able to offer numerous (and cheap!) options for straightforward ads, branded content style interviews and author features, links to your latest countdown deal or freebie, links to your latest reviews etc or a combination of any or all of the above. But that’s for the future, I’m still developing BookD and am looking to introduce a new section where authors can have posts from their blogs featured, some of these will then be on the main ‘Headlines’ page and be mixing with stories about the superstar authors and celebrity writers out there.

The audience for BookD will only continue to grow as we have various initiatives planned (I’ve also got other magazines in different stages of development so eventually there’ll be opportunities to cross-promote as well) so if you’d like to submit a particular post from your blog for consideration then give me a shout at ed@bykerbooks.co.uk it’s free and all I ask in return is that you reciprocate with a post and link about BookD if we feature you.

So to sum up, Byker Books didn’t die it just evolved and the ethos now is the same as it ever was – lets take the unknown scribbler and put them in front of a whole new audience.

BookD can be found at www.ilovebooks.uk

So I highly recommend any authors, bloggers, readers and reviewers check out BookD -but don’t worry if you forget, as I will continue to shout out and share on Facebook, Twitter and all those other social media sites out there!  Thanks again Andy! And if you want to get in contact with Andy or check out his various sites, here are the links:
Website: www.ilovebooks.uk
Website: www.bykerbooks.co.uk
Twitter: @EdBykerbooks
Email:   ed@bykerbooks.co.uk