Absolutely thrilled to have been asked by the awesome Liz Barnsley to take part in Michael Stanley‘s A Death In The Family Blog Tour!!  Mr Stanley has provided a fabulous guest post…so check it out! 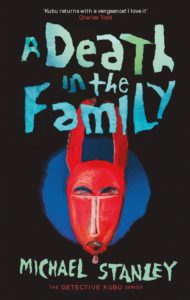 Not many people have heard of the small town of Shoshong in Botswana, yet it has one of the most interesting histories of any town in southern Africa. Shoshong thrived because it was strategically placed on the main road north between the Cape and what is now Zimbabwe. It became an important trading centre and was host to hunters, missionaries, and famous explorers—including David Livingstone. Some Europeans settled there, and traces of their tin-roofed, rectangular houses and artefacts remain. 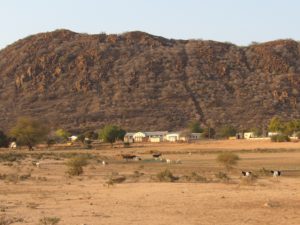 Chief Sekgoma I, one of the ancestors of the current president of Botswana, Ian Khama, chose the site for his capital for two critical reasons—it’s protected on the north by a horseshoe of hills that are difficult to climb because of dolomite boulder scree, and it had comparatively plentiful water from the Bonwapitse river, which flows into the town through a gorge in the hills. Since the Matabele to the north were pretty unfriendly neighbours at the time, the hills were an important shield. Sekgoma’s son, Khama III, consolidated and built Shoshong into a strategic centre. In 1866 it had around 30,000 people, only a few thousand less than South Africa’s most important city of the time, Cape Town. 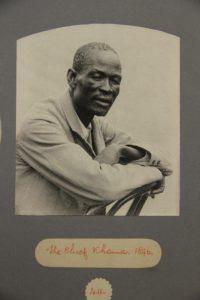 The surrounding hills in this flat country had Iron Age settlements dating to 500BC, with relics that are preserved in the national museum. San art can also be found in the caves, where women and children from Shoshong took refuge during Matabele attacks. The strange rock structures and exotic plants make the hills fascinating to explore. 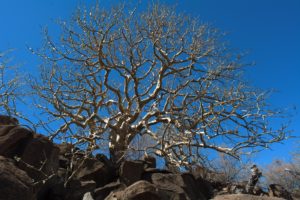 Shoshong’s Achilles heel was the river. A prolonged drought and the large population’s stress on the environment left the town almost dry and surrounded by semi-desert. By 1889 the town was described as “a filthy place with only one trickling well.” Khama III told his people to pack up and move, which they did, leaving behind a ghost town.

Over the years Shoshong has been resettled and is a thriving town once more, justly proud of its history and culture, which is celebrated with the annual Bollapela Festival. It also lies in a region of mineral wealth with several producing mines in the area. With the influx of Chinese people into Botswana (and the rest of Africa) and the haphazard way in which Chinese companies execute on their promises, we wondered what would happen if Shoshong’s heritage were threatened by an encroaching Chinese-owned mine. We thought about the split that could occur in the town between the older leaders protecting the town’s traditions, and young men needing work. Throw in some unsavoury political goings-on, and we had the backstory for a Detective Kubu book. It eventually became A Death in the Family.

The story starts with the inexplicable murder of Kubu’s beloved father, a harmless, infirm old man. Reeling from grief and unable to be involved in his father’s case for fear of bias, Kubu investigates the apparent suicide of a senior official in the department of mines. Deciding that the death is actually murder, Kubu follows the trail, which seems to lead to both the American embassy and Shoshong, where the conflict between a Chinese-owned mine and the local people is simmering. Kubu discovers that his father was born near Shoshong, and clues seem to link the conflict there to his father’s death. When the town erupts, his boss needs to get Kubu out of the way, and he is sent to New York to attend an Interpol conference. Yet the trail continues even there. Eventually Kubu is able to expose the corruption behind many of the issues and discover the link to his father’s murder.

We’re often asked how our books fare in Botswana—a good question since we’re both South Africans. Despite the small readership of fiction in the country, the books are well received. And at this year’s Bollapella festival we were thrilled to have A Death in the Family chosen to be one of the highlighted books, with songs, dances, and scenes acted from it. It’s enough to make us want to set another book there!

Thanks so much Michael & Liz for asking me to take part!  The book is available on amazon, so click the link below for a copy!