For Reasons Unknown by Michael H Wood was one of my favourite debut novels of 2015, so I am thrilled to bits that my guest reviewer, Claire Knight,  has finally had a chance to read it too!  My review can be found here.  Let’s see what my ‘lil star thought! 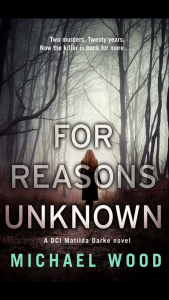 DCI Matilda Darke has returned to work after a nine month absence. A shadow of her former self, she is tasked with re-opening a cold case: the terrifyingly brutal murders of Miranda and Stefan Harkness. The only witness was their eleven-year-old son, Jonathan, who was too deeply traumatized to speak a word.

Then a dead body is discovered, and the investigation leads back to Matilda’s case. Suddenly the past and present converge, and it seems a killer may have come back for more…

For Reasons Unknown is the first in the Matilda Darke series and what a way to start a series!

You can tell Michael Wood loves his books and particularly crime fiction. The author’s love for books shines through in the descriptions involving Jonathan Harkness “Surrounded by books” “Books became an obsession ” “his biggest passion was crime fiction”. As Matilda and I learn more about Harkness, the author seamlessly inserts a list of crime writers and fictional detectives. Some I had read about, some I had heard of but then some that were new to me and made me head to Amazon to look them up!

The characters were also intriguing me – why is Maun so interested in Jonathan? Why does Faith want to please Hales so much and annoy her colleagues in the process? As for Matilda, I imagined her as a slender woman with a crisis of body image for no reason despite “being a size 12 with chunky thighs”.

I like reading books based in the local area and despite it being 30 odd miles from Leeds and not knowing Sheffield particularly well, I did recognise certain aspects of the locale mentioned. I’ve experienced Meadowhell in the New Years sales and it is elbows and pushing; Michael totally got the sentiment right!

I thoroughly enjoyed For Reasons Unknown and would recommend it to anyone who loves their police procedural crime novels….though I am a late joiner to the Matilda Darke fan club!!

Great review Claire!  If my ‘lil possum has piqued your interest, click the link below!