My ‘lil star has been doing some #CrimeBook homework in prep for the #PrimaFacie blog tour we are taking part in next week!  A+ for Claire and her review of Netta Newbound’s #BehindShadows – not for the faint hearted though!! 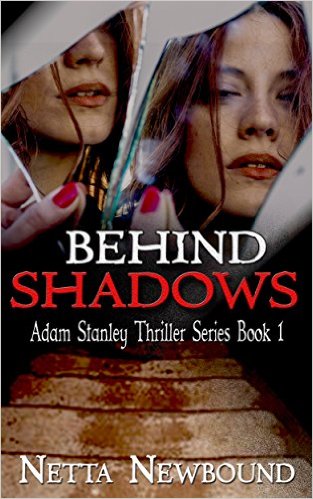 Amanda Flynn’s life is falling apart. Her spineless cheating husband has taken her beloved children. Her paedophile father, who went to prison vowing revenge, has been abruptly released. And now someone in the shadows is watching her every move.

When one by one her father and his cohorts turn up dead, Amanda finds herself at the centre of several murder investigations—with no alibi and a diagnosis of Multiple Personality Disorder. Abandoned, scared and fighting to clear her name as more and more damning evidence comes to light, Amanda begins to doubt her own sanity.

Could she really be a brutal killer?

Content Advisory: This book is intended for mature audiences and contains graphic and disturbing imagery

Claire’s Reviews:
Behind Shadows is the first in the Adam Stanley series but he isn’t a central character in the story to start with – it’s all about Amanda Flynn, a woman who is going through a personal crisis after discovering her philandering husband in a bathroom with a curvy red-head and on top of that she find out that her convicted paedophile of a father has been released from prison 6 weeks previous and has gone missing. Enter Adam Stanley! As the story develops and there are more bodies dropping, Adam comes into his own and his and Amanda’s stories become more intertwined.

This book is very graphic, definitely not one for the faint-hearted! The deaths are gruesome and there is some rather explicit content at times. I did half expect some level of a shock factor after having read one of Netta’s other books “An Impossible Dilemma”, a stand-alone thriller that definitely makes you think! Beyond Shadows is another one that gives you food for thought; the murder of Amanda’s father, a paedophile who abuses his own children. Despite the horrific nature of his crimes, the guy has been murdered.

I was a bit confused by some of the language. The story is set in London but there are references to “daycare” and “homicide”, both terms I associate with our friends in the States but given the author is based in New Zealand, it makes sense.

This is a brilliant story with plenty of intrigue and bodies for a crime thriller. I was kept guessing for sometime and there was plenty of shock revelations!

A big thank you to Netta Newbound for sending me a copy of Behind Shadows. I’m looking forward to reading more investigations with Adam Stanley.

Love a book that comes with an advisory!!  This is already on my TBR and I think it may need a *bump*.  Thanks Claire for the awesome review.  Click the link below to get your hands on a copy!