My wee ‘Lil Star, Claire Knight, has been busy at the reviews again!  Today on CrimeBookJunkie, Claire has reviewed Silver by Mark L Fowler – published by BloodHound Books.  Let’s see what her thoughts on this book are! 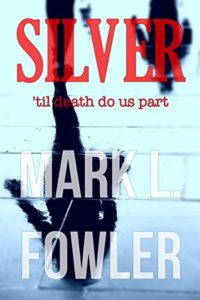 A reader with a dangerous obsession.

A killer who shouldn’t exist.

When romance novelist Joy Haversham is murdered she leaves behind a husband, daughter and Silver,  a disturbing, unfinished manuscript the publishing world are desperate to read. But her grieving husband,  Roger, refuses to allow publication. Roger wants to lock himself away with his memories. But the fans have other ideas.

Nick Slater, a former reporter and successful novelist who covered the trial, remains obsessed with the unanswered questions surrounding Joy’s death. Determined to learn the truth Nick finds himself in trouble. And the evidence he will find is … impossible.

I have to admit, it took me a little to get into Silver!  I didn’t fully get where the story was heading until I was about a quarter of the way through. But the more I read the further I was drawn into the story and I’m glad I stuck with it!

There is a very diverse cast in this book. I was very intrigued by Gils Ray…who is he? What is he? How is he doing what he’s doing? Is there more to him than him just being a reformed murderer preparing for release? Is he just delusional??  So many questions!!

Roger now he was a little dull character but then what do you expect from a lecturing professor but is all what it seems?? The man with the secret project!

I really liked the banter between Tim and Nick – it reminds me of some of the guys I work with “Where’s the cake?” “If I’d known you were coming I would have notified the caterers.”

The author’s writing style is very readable, enough descriptions to make you imagine the surroundings.  One phrase that really struck me was “Atlantis of sleep”.  To me Grace was being wrenched from her deep sleep which I could totally sympathise with!

Silver is a psychological thriller with intrigue and mystery that keeps you reading to the end! Mark Fowler is definitely an author I’d read again – I’ll be hunting out his previous books when my rather large pile of reads allows me!

A big thank you to Mark Fowler and Shell Baker of Crime Book Club on Facebook for giving me a copy of Silver to read and review.

Ooooooh!  I am liking the sound of this…may have to add it to the TBR!  Click the link below if Silver sounds like Gold to you!