Hey #bookjunkies!  Social media is a wonderful thing…especially when it comes to meeting new authors!  Robert E. Dunn contacted me via Twitter and I was keen to share the details of A Living Grave – the first in the Katerina Williams novels!  Lucky for me, Robert agreed to to a Guest Author post …so check out the synopsis and what Mr Dunn has to say on the subject of….being feminine!!

The first in a gritty new series featuring sheriff’s detective Katrina Williams, as she investigates moonshine, murder, and the ghosts of her own past…

BODY OF PROOF
Katrina Williams left the Army ten years ago disillusioned and damaged. Now a sheriff’s detective at home in the Missouri Ozarks, Katrina is living her life one case at a time—between mandated therapy sessions—until she learns that she’s a suspect in a military investigation with ties to her painful past.

The disappearance of a local girl is far from the routine distraction, however. Brutally murdered, the girl’s corpse is found by a bottlegger whose information leads Katrina into a tangled web of teenagers, moonshiners, motorcycle clubs, and a fellow veteran battling illness and his own personal demons. Unraveling each thread will take time Katrina might not have as the Army investigator turns his searchlight on the devastating incident that ended her military career. Now Katrina will need to dig deep for the truth—before she’s found buried…

Let me tell you about femininity—
That’s right, the 50 year old, white guy, is stepping into the diversity world to tell you about what he can’t possibly understand. What a shocker.

This is different though. At least I hope so. I’ve written a book with a female main character. A LIVING GRAVE, A Katrina Williams Mystery. Check out this great cover. I’m pretty proud of it. 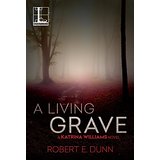 This is not my first mystery and not my first female character. But I’ve begun to notice something consistent in my criticisms. The women characters in my books, only the main characters, have been described to me as, not feminine. The odd thing has been that the characters are also getting a lot of attention from readers as true people. The first time I thought I just didn’t connect with that reader. It wasn’t a big deal, you can’t get everyone and not everyone will get you. But it kept popping up every so often. I had to take a look and consider where I might be failing.

I noticed that the accusation, and I came to consider it just that, an accusation that the character was not feminine enough, was only aimed at the characters who I had intentionally put into gender defying positions. That’s to say, the charge was put against women who were performing the traditionally masculine role of hero. I don’t write damsels in distress.

In A LIVING GRAVE, Katrina (Hurricane) Williams is a former US Army officer and member of the Military Police. Ten years after a brutal and life changing assault by fellow soldiers in Iraq, she is a Sheriff’s Department detective in the Missouri Ozarks. She’s not exactly a good cop either. Katrina is prone to drinking and violence. Her own department requires her to attend ongoing therapy. When two cases converge, a bizarre child murder and modern day bootlegging, Katrina meets fellow veteran turned painter, Nelson Solomon. Solomon, is dealing with cancer from duty related toxin exposure, but seems to be on the mend. The ensuing flirtation is good for both of them until an Army Investigator shows up making accusations about Katrina’s past.

Even as she fights to clear her own name, Katrina begins falling for Solomon, a man keeping devastating secrets. When the investigation into the child murder leads to a place of utter darkness, Katrina loses control. As she spirals, another murder leads to connections between mobsters, bikers, and Solomon.

Dragged down by death, guilt, and uncontrolled anger, Katrina hits bottom. Forced to confront the demons that control her, she finally chooses to fight for a life worth living and a love she desperately needs. But she may be too late. In one long night of loss and violence, she pushes aside the secrets in hopes of saving Solomon from his own dangerous choices.
Katrina is not just the hero doing the hard things that heroes do in these stories, she’s a woman in, and defined by, a male dominated world. Now I don’t know about you, but I’ve known Katrina in many guises throughout my life. Women in the military, women cops, women pilots, and politicians all have in common the experience of having their femininity questioned. So it came to me that what is being noticed about my characters is what they do, not who they are.

Pigeon holes can be comfy places. They secure all the little thoughts we have and keep them in a neat little order. Most of the time we don’t even realize exactly where we’re storing our ideas. Until the slot gets just a little too tight. Feminine, I’ve decided is a pigeon hole. Along with masculine, and homo, les, trans, even andro it is just a small box within which to store our expectations. When the expectations are challenged, it’s just human nature to point to the challenger and blame them for the fact they don’t fit in the slot.

At this point it would be easy to say that I’m some grumpy, old guy being defensive about his book and crabbing about my own failure. Heck you might be right there. The things I’m saying here are what I understand and believe, not some great truth. Truth. I know how fluid and charged that label can be. And, while I may be an old coot, not above standing in my lawn and shaking a fist yelling, “You kids stay off my lawn,” I’m a dad. I have daughters. I have three girls who, I affectionately refer to as, my nerds. My oldest loves English history especially the Tudors and Harry Potter equally. Sometimes I’m not sure she understands there is a difference. The twins are gamer girls. They love anime, D&D, and obsess over Xbox and PlayStation. I save most of my grumpy rants for when someone tries to fit them into the “feminine” slot. And it was writing female characters that brought me to the understanding. I don’t get bothered by the pigeon hole. I’m bothered by the choice involved. You don’t get to say what’s feminine. Even if you are a damsel with or without the distress. We all have to choose that for ourselves.

So my characters are like my daughters, making the world fit their idea of who they are. Never letting anyone shove them into a slot that is too small.

That probably doesn’t sound like much of a revelation. You may even think it obvious. But that is the power of fiction. Someone can look at another person on the street and see that they are different. They behave differently, dress differently, or believe differently. We, in the modern, western world, are basically trained to accept that. Often with a roll of the eye. When things get a little hairy though, tough economy, strange people blowing things up, immigrants wanting to be treated like human beings, we find it so easy to reject training. Fiction forces us to look, not at the differences of the person outside, but at those inside. The challenge is internal. Being polite or politically correct won’t get you through an encounter with a book. Books stare back.

I’ve decided, as a writer, I’m going to let my characters be who they are. You would be surprised how much they decide for themselves once you start writing. And I’ve decided, as an old white guy, to let other people define themselves. I’ll not expect them to fit the slots that habit or expectation makes me want them in.

I hope you will read A LIVING GRAVE and see what I see in Katrina Williams, a beautiful, and strong woman, making her own life and choices in the face of violence and the assumptions of readers. If not, take a chance and look for the work in progress when it comes out. In this one, a violent criminal with a badge and a gay cop light up the Texas/Mexican border and the DEA. How soon until someone tells me a gay cop can’t be manly or is unrealistic?

If you do want to look, check out Katrina Williams and A LIVING GRAVE via the link below:

Thanks so much Robert for an interesting post!  And #bookjunkies…watch this space for another guest post from Mr Dunn in the future!