Today Claire is reviewing Deadly Deceit by Jean Harrod.  Described as “..another exciting page-turner full of intrigue, tension and drama from this knowledgeable author” it seems we are in for a treat #bookjunkies!  Over to you lil’ star! 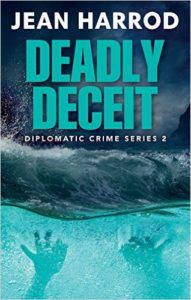 British diplomat Jess Turner is on temporary assignment in the Governor’s Office of the Turks and Caicos Islands in the Caribbean. The coral sands and turquoise seas are stunning, but things are not what they seem. The locals are upset about boatloads of illegal migrants arriving from nearby Haiti on their shores, and fearful of the voodoo they bring. Tensions are running high.

When the Governor is critically injured in a car crash, and a brutal murder occurs, Jess is left reeling. What she starts to uncover sends shockwaves through the corridors of power back in London.

DI Tom Sangster is investigating criminal gangs smuggling migrants to Australia. While in Miami for talks with US officials on this global problem, he sees Jess passing through the airport. He visits her in the TCI to find out how the British Government deals with the migrant problem in their Overseas Territory. Soon, they are working together to uncover the TCI’s dark and disturbing secrets.

But a hurricane is approaching and, as with each revelation they get closer to the truth, they end up fighting for their own lives.

“From the moment she arrived….it felt like she’d been caught up in an accelerating maelstrom and it was set to get a whole lot worse”

Deadly Deceit is a serious Death in Paradise (and to be clear I love Death in Paradise)! There’s the sweltering heat of the Turks and Caicos islands that radiates through the pages, the body count, the Brit representing the UK establishment in the Caribbean but Deadly Deceit is not tongue-in-cheek as the BBC series is. It’s more sinister in its feel!

Jess is drafted in as cover in the Governor’s office and she doesn’t know what’s hit her. Not only does she have to deal just the unusual incidents taking place on the islands but Mother Nature is making her annual devastating presence known to the islands of the Caribbean. A chance sighting of Jess in Miami Airport leads Aussie cop Tom to the tropical islands and into the smoke and mirrors that Jess faces along the belief of the existence of voodoo! I loved the rapport between Jess and Tom despite them not having seen each other for a couple of years.

As I finished the final chapters of Deadly Deceit, I toddled off to Amazon and downloaded the first in the deadly series, Deadly Diplomacy. As I’d met Jess and Tom as friends, I wanted to read about the start of their friendship and the Brisbane case that is mentioned a number of times in the sequel. I can see me travelling all over the world with Jess and Tom as I follow their escapades – there will be more, won’t there Jean?!?

A big thank you to Jean Harrod and CrimeBookJunkie Book Blog for giving me this ebook in return for my unbiased opinion. Another new author for me to follow ?

Great review Claire!  If this is your cup of tea #bookjunkies, click the link below!