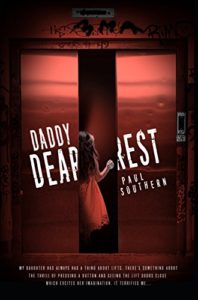 An estranged father’s weekend with his beloved five-year-old daughter turns into a nightmare when she gets into the lift of a city centre tower block and goes down without him. She vanishes without a trace. It sets off a race against time, and a nationwide manhunt, to find her. As the police investigation closes in, suspicion falls on those closest to her – with devastating consequences. Daddy Dearest is a terrifying story of love, obsession and psychological meltdown.

‘My daughter has always had a thing about lifts. There’s something about the thrill of pressing a button and seeing the lift doors close which excites her imagination. It terrifies me. Every time she walks in, I imagine it’s the last time I’ll see her. What if she hits the button before I get there? What if the lift doors close and I can’t get her out? It drives me nuts. There are eight floors in the Sears building, nine if you count the basement, and the lift is fast: more like a fairground ride, really. It does top to bottom in twelve seconds. I’ve timed it. Taking the stairs, I’ve done it in forty-two. That leaves a gap of thirty seconds. You’d be surprised what can happen in that time. I was.’

A massive thanks to the author, Paul Southern, who gave me a copy of this book in exchange for an honest review.

The setting of this book mainly takes place in a large city centre tower block, as outlined in the synopsis.  Various themes can be found within the pages of this book and include such things as: guilt; a father’s love for his child; loss; betrayal; obsession; love and OCD.

When I started reading this book I felt a little lost.  For me, the first chapter felt disjointed and by the end of the book I still had no idea of where it fit in.  The #killerhook for me came a few chapters in, and if I am honest, had the book started here I believe it would have made me struggle a little less.

The pace is quick and the plot interesting.  I did figure out the twist fairly early and well before the big reveal.  The story is told from first person POV and I struggled a bit with that as I felt there were gaps that could have been filled if the story had been told in third person POV.

I thought the character development was good in the main, but again had this nagging feeling that I wanted to know more. I was especially intrigued by Rashelle and really hoped I would learn more about her. I loved the daughter as well and at times was reminded of #Room by Emma Donoghue -even though we never had the daughter’s point of view.  The way she was written was clever and intriguing.

My emotions were run ragged throughout.  I felt fear, anger, despair, worry — so many emotions!!  Very tense at times but also moments where I felt relieved.  It all felt a little bit odd and the mixture of emotions was an added bonus making the overall story feel more believable.

Despite my mixed emotions, I felt this was a good book.  I will definitely be checking out more from this author and if it interests you, click the link below for a copy!