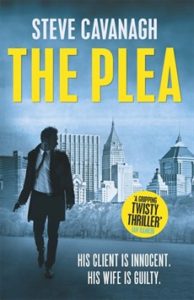 When David Child, a major client of a corrupt New York law firm, is arrested for murder, the FBI ask con-artist-turned-lawyer Eddie Flynn to secure Child as his client and force him to testify against the firm.

Eddie’s not a man to be coerced into representing a guilty client, but the FBI have incriminating files on Eddie’s wife, and if Eddie won’t play ball, she’ll pay the price.

When Eddie meets Child he’s convinced the man is innocent, despite overwhelming evidence to the contrary. With the FBI putting pressure on him to secure the plea, Eddie must find a way to prove Child’s innocence while keeping his wife out of danger – not just from the FBI, but from the firm itself.

Many thanks to Orion, the author and his lovely wife Tracy, as well as Liz Barnsley for an ARC of this book in exchange for an honest review.

So this is what happened #bookjunkies. The fabulous Kate Moloney of Bibliophile Book Club raved….yes, I mean RAVED about how great this author…Steve something or other book The Defence was.  I had never heard of Steve Cavanagh but downloaded the book any way.  And it sat on my TBR.  Then the wonderful Liz Barnsley of Liz Loves Books messaged me and asked if I wanted to be on The Plea Blog Tour.  I read the blurb and remembered Kate raving…and within seconds had agreed.  Best-Decision-Of-My-Life!

I have only come across a handful of books which made me sit up and take notice — THIS was one of those books.  The Plea is a fast-paced, action-filled, legal thriller which …well….Holy Crap peeps….I was buzzing when I finished it.  I was also left wanting for more…and more….and MORE!

The plot had me breathless with anticipation as I turned (clicked actually–I have a kindle) each page.  I mean, you could not get a more thrilling storyline — it was awesome!  With a legal setting that had me on the edge of my seat — I love a good legal thriller–the tension was un-friggin-believable!  And dare I say it, this book was a hell of a lot better than some of the John Grisham books I have read –and I am a serious fan of Grisham, so I don’t say that lightly!

Themes of love, conspiracy, politics, hope and justice shone through as each chapter unfolded.  The description of people, places and events was so realistic, I felt like I was part of the story– right beside Eddie Flynn *SWOON* as the action unfurled.

And the characters — Oh My Giddy Aunt– I am definitely IN LOVE with Eddie Flynn. EEEEEEEK!!!  This guy is unreal!  Ex-hustler turned lawyer; estranged from his wife and daughter but wants them back and out for justice.  What is not to love!  You really feel for this guy! The CIA, the FBI –can he trust them?  His wife and daughter – will they come to harm? And David Child’s – was he involved in murder?  Is he innocent or guilty?  Should he take a plea?  See what I mean — the questions race through your mind as you learn more and more about the characters and story.  They are memorable, relate-able and evoke a whole range of emotions –Su-bloody-perb!!

So just in case I have not made myself perfectly clear — I LOVED THIS BOOK and I am a huge….GINORMOUS fan of the very talented Steve Cavanagh now.  Kudos to Kate for making me want to read these books!  If I could give it more than 5 stars…you bet your pie-hole I would!

I truly hope you race off to amazon now and purchase it #bookjunkies as it is one book that will feed your crime addiction and leave you aching for more.  Click the link below if you want to get there quicker!  And read on — fab post by the author below.

One final thing — a huge thanks to Tracy Mearns, who is not only extremely lovely, but she sent a wonderful gift ….and I love it! 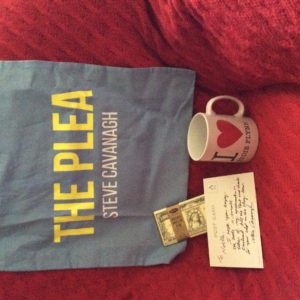 Before I set about writing my second book, The Plea, I was guilty of feeling all of the trepidation and fear that comes with second novels. Second books are tough. No doubt about it. You hear a lot of stories about “the difficult second album,” or “second-novel syndrome.” When you are writing your first book, right at the beginning, you don’t know if it will ever be finished, or if in fact you will be able to write at all.

Writing a first novel is a massive leap of faith taken with a dollop of unearned optimism and a hefty slice of blissful ignorance.

Beginning a second book is daunting. Feelings are a lot different because you know you can write a book, having finished the first one, but at the same time you wonder if the first was simply a fluke, and if you’ve said all you have to say in that first novel. Also, you are aware of the massive amount of work that lies ahead of you.

Writing a second novel is like taking the same kind of leap that you took the first time, except now you know how high and how dangerous the leap actually is, and your pants are on fire.

The reason it feels like your underwear is ablaze is that this time around you know that someone is actually going to read your book. Not only does it have to be written, but it has to be read. First, by your agent, then your editor, and yes, most scary of all, and call me a wild optimist if you like, but eventually an actual reader might pick it up and open those pages. I realise that I’m now delving firmly into the realm of fantasy here, but you also want those people who happen to pick up your book and open it, to actually keep it open and turn the pages until the end.

So how on earth do you set about accomplishing any of this?

It took me a while to figure it out, but I got there.

The trick is to write the book that you want to read and forget everything else. Well, maybe not everything.

There were certain elements of my first novel, The Defence, which I liked and which readers also enjoyed. In most legal thrillers, the book takes place over a long period of time, stretching from the initial crime, over months of preparation and then the eventual trial. In The Defence, the action takes place over the space of 48 hours. This added to the pace, the tension, all of it. Using this strict and focussed time period turned everything up a notch. Similarly, that original book was written in first person, with Eddie narrating the action. This made the reader feel as though they were right beside Eddie, trapped in that terrible situation with him. It also helped create a relationship between Eddie and the reader, almost as if the writer was removed entirely from that relationship.

Armed with this, and a basic idea of the plot, I set about writing The Plea. It’s about a corrupt law firm, the federal law enforcement agency that’s after them, and Eddie Flynn’s wife gets caught in the crossfire.

I have to say I’m pleased with The Plea (trying saying that after a couple of beers).

At the moment I’m finishing off book three. When I started that book it didn’t feel like such a leap. I’d done this twice before. A certain amount of unearned confidence carried me through that book.

And there is one thing, more than any other, that has kept me going through the writing of every book – my wife. The Plea is dedicated to Tracy, but really all of my books could be dedicated to her. She is a constant support, a sounding board and a source of great ideas, and she puts up with me.

That’s my big writing tip. If you are writing a book, have Tracy in your corner.