My lil’ star, Claire Knight, has been busy at the keyboards as evidenced by the onslaught of emails I have with reviews just waiting to be posted!  Here is a great review of Sheryl Browne’s The Edge Of Sanity. 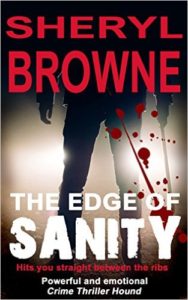 How far would YOU go to protect your family?
A decent, ordinary man, a man who has already suffered the loss of one child, Daniel Conner is forced by extraordinary circumstances into being a hero. Tortured, forcibly drugged—heroin still pulsating nauseatingly through his veins—his wife and daughter degraded, Daniel knows their kidnapper is beyond reasoning with. But does being pushed one step beyond endurance justify doing the unthinkable?

High on drugs, indebted to his supplier, and desperate, Charlie Roberts takes Daniel’s wife and daughter hostage. Daniel does everything within his power to rescue the situation bloodlessly. Eventually though, Daniel realises that with or without violent mood swings induced by amphetamines and cocaine, Charlie Roberts is a psychopath. He wants more than Daniel’s money.

Back in February I “attended” The Valentine Bonanza Party hosted by Susan Roach of Suzie’s BookBlog. I won my choice of a Sheryl Browne novels. Not knowing much about Sheryl, I thought it would be a light chick lit / romance novel (given it had been a Valentines giveaway). But when Sheryl contacted me and said she had two psychological thrillers I could also choose from as well, I was straight off to Amazon to read the synopsis of them both and I opted for The Edge Of Sanity. And then it proceeded to sit on my kindle….

After reading a number of books I had been given to review, I decided to treat myself to a non-review book and I wanted something that would be a treat and but remembering I’d recently won a paper copy of Sheryl Browne’s The Rest Of My Life I decided to search out The Edge of Sanity from my virtual pile and off I went.

The book itself was a little slow to start with, I was a bit perplexed whether I was reading a psychological thriller or not but the tension soon appeared in a big way!

Charlie Roberts starts off as just a bit of a good-looking wide boy who has a unique way with the ladies. But as the story goes on he becomes an unstable unattractive nut case, nutter extraordinaire, totally devoid of morality and on the edge of sanity (I see the tumbleweed heading across the plain).

I really felt for Dan and Jo Connor; wracked with guilt and grief after losing one daughter, another being a typical teenager pulling down the communication hatches and doing her own thing and to top it off, their marriage has crumbled like a piece of shortbread. Enter stage left Charlie Roberts turning their lives upside down, putting them through hell all for one thing….cold hard cash.

In the Introduction, the author said she wasn’t not sure she pulled it off; for me as a lover of the psychological thriller, it’s a definite yes! This book is a great example of writers jumping across genres to publish something totally different and doing it well. Sheryl is know for her contemporary romance novels; I’ve not read any yet but I will be!

A big thank you to Sheryl Browne for sending me this ebook as my prize from Suzie’s book blog Valentine Bonanza Giveaway.

I am beginning to wonder if Guest Reviewers were such a good idea…my thought process was that they could read all the great books I could not fit on my TBR….I now am adding the books to said TBR …LOL!  And this is no exception!  Click the link below if Claire has piqued your interest too!

6 Replies to “The Edge of Sanity: Claire Knight ~Guest Review~”