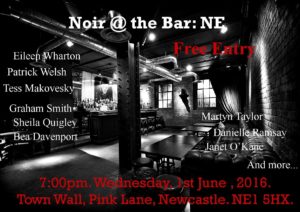 EEEEEEEK bookjunkies!!  Dead excited that the absolutely lovely Vic Watson has written a piece on Noir At The Bar NE!  These events have become extremely popular and well worth checking out if you are in the area!  So without further ado…over to Vic!

Noir at the Bar comes to Newcastle on 1st June and although I am new to hosting, the concept has been knocking around for about eight years. Having started in Philadelphia in 2008, the N@tB model spread across the US like a noir-y virus but I for one, am more than happy to catch it!

Noir at the Bar, ultimately, is about collecting readers and writers of crime fiction in all of its guises, putting them together in a bar and letting them mingle. Depending on which Noir at the Bar you visit, the set-up can vary. The Newcastle event, the first one in the north east of England, will feature a host of authors – both new and established – reading snippets of their work for the audience’s delectation. There’s no requirement to be published in order to read at N@tB, similarly guests can read anything so, even if they have a book published, they can read from their Work in Progress if they so desire. We’re a pretty easy going bunch.

In-keeping with the spirit of the event, we hope that we’ll create a community of writers and readers. Writing doesn’t tend to be a particularly social aspect but I’ve found, through visiting weekend courses like Crime and Publishment and events like Newcastle Noir, that writers actually relish socialising, especially with people who appreciate their work! We want to provide an opportunity for readers and writers to talk to one another as well as listen to some cracking work.

There’ll also be the opportunity for writers who aren’t on the bill to enter the wildcard round. One lucky reader’s name will be drawn at random and they will close the evening with their reading. How cool is that?

When picking the line-up for our initial foray into N@tB, I asked writers I’m familiar with from the region as well as inviting Tess Makovesky and Graham Smith, who appeared at Noir at the Bar Carlisle in March, to pass on the torch. Graham and Jay Stringer – who’s been responsible for the Glasgow incarnation of N@tB – were instrumental in helping me get the Newcastle chapter set up so here’s a shout out to them.

I also invited the Queen of Newcastle Noir, Jacky Collins, to co-host with me and I’m so thrilled to have her as my ‘partner-in-crime’.

The response we’ve received from people thus far has been incredible and just goes to show that there is a thriving community of readers and writers of noir in the north east. I think many of us have been out there on our own, thinking we were the only ones when, in fact, we just needed someone to get us together. We’ve been so popular that we’re already booking guests for Noir at the Bar NE #2.

Noir at the Bar is happening on Wednesday, June 1st at the Town Wall pub (Pink Lane, Newcastle). It starts at 7pm but space is limited so get there early to ensure you don’t miss out!